Barefoot Bay couple back behind bars for drug trafficking 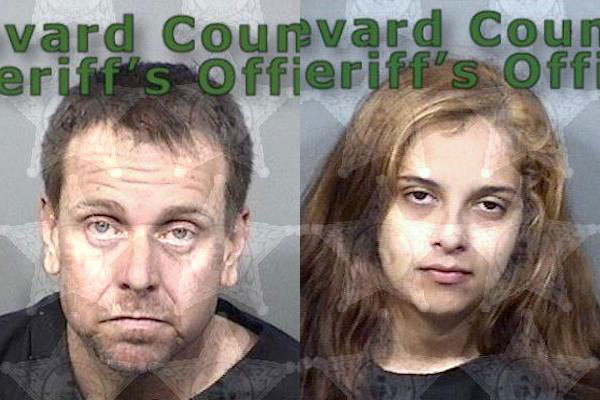 MICCO – A Barefoot Bay couple has been arrested twice during the past month for drug trafficking charges, according to the Brevard County Sheriff’s Office.

On Monday at approximately 9:30 a.m., a deputy conducted a traffic stop in Barefoot Bay and found heroin, cocaine, and methamphetamine in the vehicle, the report said.

The driver, identified as 41-year-old Christopher Jon Bauer, spontaneously uttered, “I’m going to register the vehicle now, the sticker on the tag belongs to my mom’s white car,” according to the affidavit.

At the same time, the passenger, identified as 23-year-old Sandy Ann Perez, began screaming at the deputy. She was detained during the traffic stop.

“I have a syringe inside my jeans, and I believe the cap came off because it’s sticking me in my leg,” Perez told the deputy.

Both Bauer and Perez reside at the 900 block of Waterway Drive in Barefoot Bay.

Perez told deputies that she knew Bauer was in possession of the drugs and knows he “consistently sells” them to make money, the affidavit said. She described a package Bauer hid in the center console, which was recovered by deputies.

The package contained 16 grams of heroin, 7 grams of cocaine, and 3 grams of methamphetamine, according to the report.

Bauer and Perez were out on bond. They were arrested last month on drug trafficking charges after 14 grams of heroin was found hidden in Perez’s vagina.

Also, Bauer was arrested last Sunday for refusing to allow paramedics into his home to treat a woman lying on the floor.

Bauer and Perez face multiple drug charges for the two recent arrests that occurred within a month.