Words from War monument to be unveiled in Vero Beach 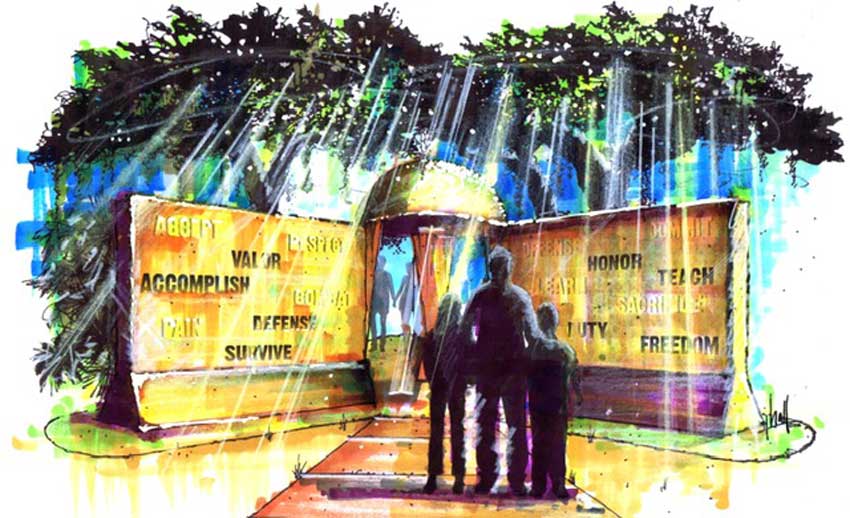 The Next Generation Veterans, Inc., of Indian River County has commissioned a monumental sculpture to be installed in January 2021 at Riverside Park in Vero Beach.

Words from War is a monument created by renowned sculptor Ross Power and will stand more than 9 feet tall and 18 feet in diameter.

Over 44,000 pounds of precision cast concrete is being used to replicate T-Walls, the symbol of safety known by all desert combat veterans. Forty-eight words are boldly cast into the three monolithic walls, words that come directly from the Iraq/Afghanistan combat veterans who have engaged in deeply personal interviews with the artist.

Over the past two years, artist Ross Power has immersed himself with our young veterans who have served in the Iraq/Afghanistan wars. Power will be giving a financial contribution equaling half his commission to the Indian River County Veterans Council for all their great work supporting our local veterans in need. So, of their $300K goal, $150K goes toward the monument, and $150K will go to the IRC Veterans Council. They will use the funds in direct aid to all of the county’s veterans.

The project has raised over $188K thus far, and because they plan to unveil and dedicate the memorial on Nov. 21, the project is aggressively campaigning to raise the balance.

To that end, they commenced the “One Hundred Day March” at the beginning of August. Each day, veterans and civilians march with the American flag from the artists’ studio on 20th Ave to the site of the future monument in Riverside Park.

Due to all the rain and drainage issues, the monument will most likely not be unveiled and dedicated until mid-January.

The site has been cleared and leveled, and the foundation will be poured before Thanksgiving.

For more information, visit the Words from War website.