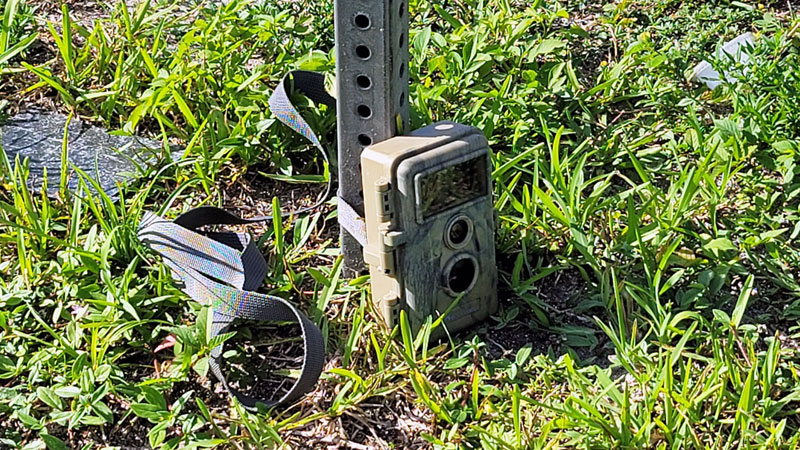 The Indian River County Sheriff’s Office is investigating a political sign and an outdoor camera allegedly targeting LaDonna Corbin, a school board candidate for District 2.

Sheriff Eric Flowers told Sebastian Daily that deputies “found a game cam attached to a GoLine sign,” and it’s being passed on to detectives to see if any crime occurred.

The Sheriff’s Office responded to Oslo Road and 9th Ave SW in Vero Beach on Saturday morning about a sign next to Corbin’s that read “Crazy Corbin Says Scan Me” with a QR Code that took people to a TikTok video she recorded earlier this year. Corbin’s video is controversial because many thought her behavior was strange and “disturbing.”

When deputies arrived, they also discovered a camera pointing towards the sign next to Corbin’s as if someone was trying to catch anyone removing it.

In Corbin’s TikTok video, she appears to be having a psychological meltdown or intense mental distress while using a couple of profanities. However, Corbin and others say there’s more to the story, so we contacted the candidate to get her side.

The mother of eight told Sebastian Daily she was acting “silly” and doing a “skit” on her personal TikTok account. The platform has similar videos created by other TikTok users, but Corbin did so before deciding to become a candidate for School Board District 2. She now regrets it because her opponents are using it as a political attack.

“I was not making fun of anyone or anything. I was just having fun with myself, if that makes sense. This entire thing is saddening to read what people are saying, and I try to stay away from it, but again it is social media,” Corbin said.

Russ Lemmon, a veteran journalist for Lemmon Lines, says Corbin’s opponents have created a “smear job” in a “classic one-sided political attack.” According to Lemmon, Corbin is the biggest threat to her school board opponents in District 2, leading to the most money raised in Indian River County.

“I am passionate about mental health awareness, and the way this is being betrayed is totally wrong and out of character,” she told Sebastian Daily.

Corbin received a Bachelor of Science in Social Science from Mercer University with a Concentration in Mental Health and a minor in Education. She also earned a Master’s Degree in Health Policy and Ethics from Strayer University.

“I am not losing faith that the true voices of Indian River County will see past this and stay focused,” Corbin said.

While some say Corbin is “too crazy” and unfit to be on the school board, others say the school district needs someone like her who understands and advocates mental illness awareness.

The case involving the game cam and sign posted next to Corbin’s is an active investigation. Sebastian Daily will update if more information is available.