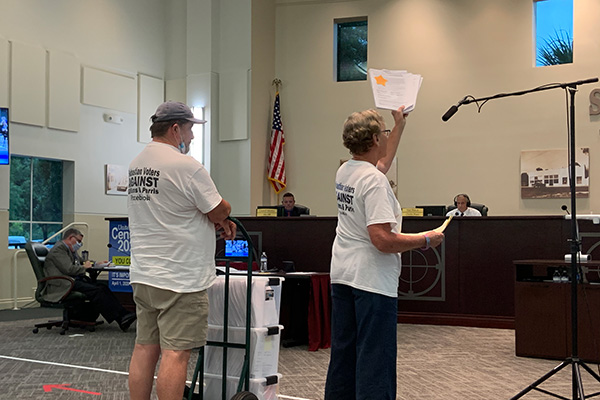 Tracey Cole, founder of the Sebastian Voters Against Gilliams and Parris PAC, shows the first round of signed petitions to recall Charles Mauti, Damien Gilliams, and Pamela Parris.

“This is the voice of Sebastian. You refused to hear us on April 22nd when we demanded the meeting be canceled so you couldn’t fire our staff,” Tracey Cole, founder of PAC recall group, told the city council.

“We are demanding three council members, who have made choices that will cost our city hundreds of thousands of dollars, to resign. You have broken a trust that will never be repaired,” Cole stated.

Cole told Charles Mauti, who was charged last week with Public Order Crimes, he could leave the council with some dignity if he continues to work with the State Attorney’s Office. Mauti was quiet as he looked at Cole. Parris shook her head and kept looking at Gilliams with a smile on her face, and Gilliams sat back in his chair and appeared to be laughing.

The City of Sebastian has been named as a defendant in a lawsuit from two high profile attorneys in Tampa who defend the Sunshine Law. They are suing the City, Mauti, Gilliams, and Parris for breaking Sunshine Laws during a nonpublic meeting on April 22nd as they attempted to fire the city staff and appoint Gilliams as the new mayor. The cost of the lawsuit could be passed onto the citizens.

“Riverview Park and the pavilion were legally rented Wednesday through Sunday last week to have a centralized location to peacefully and safely to gather signatures of the recall of three council members,” Morris said.

Twice last week, Councilman Damien Gilliams tried to disrupt the recall efforts by either speaking on a bullhorn or by visiting the tables at the park to ask for permits. Residents saw this as voter intimidation. The police had to be called during each incident to ask Gilliams to leave the park.

Bob Bedea, a director for the Sebastian Property Owners Association, read a letter from one resident who allegedly told Gilliams she was mistreated and was asked to leave the park. According to the letter, the woman later returned to confront the recall group a second time and was asked to leave by a police officer.

“The First Amendment of the United States Constitution is part of the Bill of Rights that protects freedom of speech, freedom of religion, freedom of assembly, freedom of the press, and right to petition,” Morris said.

Gilliams acknowledged that he did go to Riverview Park with his bullhorn while the recall assembly was going on because he was “doing public service announcements from across the street.” He stated they did not have a permit and a police officer asked him to leave.

“I wasn’t even on the park, I was across the street at the Splash Pad. So, you can say whatever you want,” Gilliams said. He also said he spoke with the Chief of Police, who is conducting an internal investigation.

“I came across the street from the business to walk through the park, didn’t bother anybody. I have a videotape of them attacking me. Four or five of them run up to me and asked me to get off the property. I had every right to be there,” Gilliams said.

Sebastian Daily was at the park that day and recorded Gilliams, wearing a large white hat and mask, as he was approaching the recall group with another individual. Gilliams went to tables and demanded to see permits.

The recall group called the police and tried to keep Gilliams away from the petition tables. The video then shows Gilliams leaving the park and walking on the sidewalk, waving at motorists, and taking photos with protesters who want him to resign.