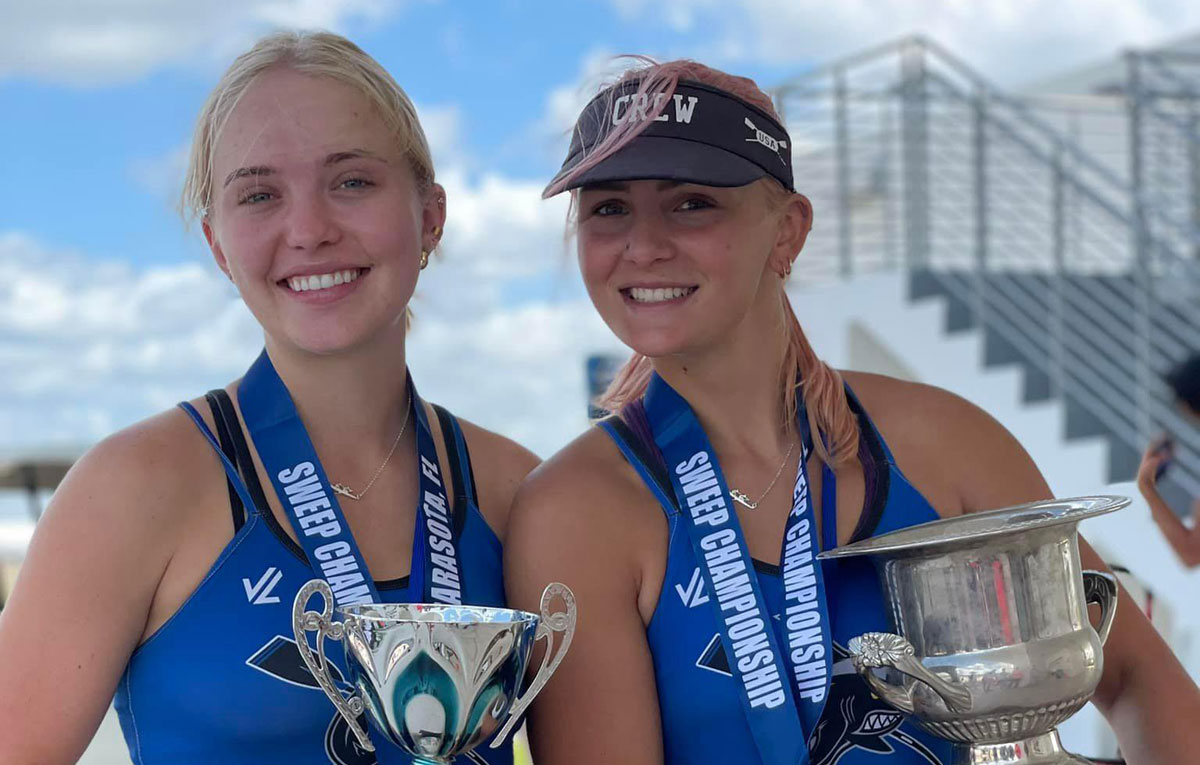 Hannah Rincon and Madison Engle, 8th graders from Sebastian River Middle School, finished 1st overall in the Girls Freshmen Double category, beating out First Coast Rowing club from Jacksonville and the South Orlando Rowing Association. Both began rowing in 6th grade and were dominant in the category through the fall and spring seasons.

“It was amazing to watch these two learn how to compete at a high level and get faster every time they took the water. It was impressive,” Coach Tom Lange told Sebastian Daily.

Captain Jeanne Phillips, who is heading to LaSalle University in Philadelphia on a rowing scholarship, stroked the Varsity Pair with Junior Piper Patterson in the bow. The Sebastian River High School duo came across the line 10 seconds ahead of Miami Rowing Club and Stewards Foundation from Tampa. They won both the Youth (Club) and Scholastic trophies in the event.

“It is rare to see a win like that in a State Championship final. I had a smile on my face the whole time I followed the race. Jeanne and Piper worked so hard this past year and led our team by example, and this was their reward. I am so proud of both of them,” Coach Lange stated.

“Kris and Gage rowed in many different lineups all spring and came together the week before East District Championships to place 2nd overall. They continued to get faster as a crew each race down the course. We are very excited for these two as they help lead a very young team,” stated Coach Lange.

“All in all, it was a great year for our very young team. We were lucky to have strong leadership from our senior captains. We will miss them, but as usual, our graduating Sharks have big plans,” Lange added.

Even though other boats did not enjoy as much success as the State Championship crews, they gained valuable experience for the next season. Many freshmen level boats were filled with middle-school rowers, such as 8th grader Skyler Elkins, who rowed with her sister Bella Elkins in the Junior 4, an event usually reserved for high school athletes.

“The future is very bright, and we hope that we have more hardworking and determined athletes join our amazing team this coming year as we look forward to more State, Regional, and possibly a National Championship,” Lange added.

The 2021 – 2022 season was a welcome return to racing on Canal 54 at Sebastian River Rowing’s facility. The club also saw visitors such as Yale University and elite rowers from clubs looking to get valuable water time leading up to National and International racing.

Sebastian River Rowing is actively recruiting rowers from 5th – to 12th grade for this coming fall and spring seasons. On Monday, June 6th, SRR will be hosting a free learn to row session from 9:00 am – to 11:00 am. There are also four separate weeklong Learn to Row/Beginner Camps and an Advanced Camp for experienced rowers.

Where is Dale Hossfield? Coast Guard searching for Vero Beach man after boat washes up