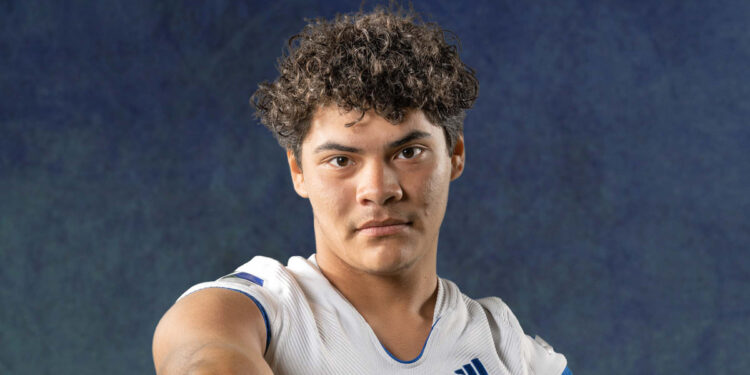 The Sebastian River High School Shark’s Varsity Football team will be traveling to Port St Lucie High School on Thursday, September 22, 2022, to play the Jaguars; kickoff will be at 6:00 pm.

Santino Ricardo Sanchez, 5’10”, is an outside linebacker and fullback for the Varsity Sharks football team. His academic goals include getting over a 3.0 GPA and attending college for business and finance.

He has been playing football since age 7. His future football goals include being the best player he can be for his teammates & coaches.

When asked how he feels about his teammates and coaches, Sanczed stated, “My coaches and team mean a lot to me. It’s more than just a team, they are family, and we have been through so much together. Our family has had ups and downs, but at the end of the day, we are a family. I will do anything for this family, and it’s not just the players and coaches; the parents also make a big difference to the team. I love my coaches, teammates, and parents, and I’m glad to be a part of the sharks family!

Chauncey Johnson is a 6’2″ nose guard and defensive tackle. His football goals include working hard to achieve as much as possible by pushing past his limits. Johnson’s best-case scenario would be to make it to the NFL.

His academic goals include getting his honors diploma while maintaining straight A’s throughout his senior year. Then, he will pursue getting a Computer Science Degree in College. He currently has a 3.1 GPA.

Outside of football, he enjoys playing video games and spending quality time with his family.

Johnson feels like the Shark’s football team is his second family.

“The team is honestly like another family to me; I try to leave a positive impact in everyone’s lives,” Johnson told Sebastian Daily.

“I would like to thank Coach Perry, Coach Harris, Coach Franklin, and Coach Pound for believing in me and giving me opportunities to play. Since I have always been an underdog, I am here to prove myself,” Johnson added.

2 men steal TV from Walmart before going to Taco Bell