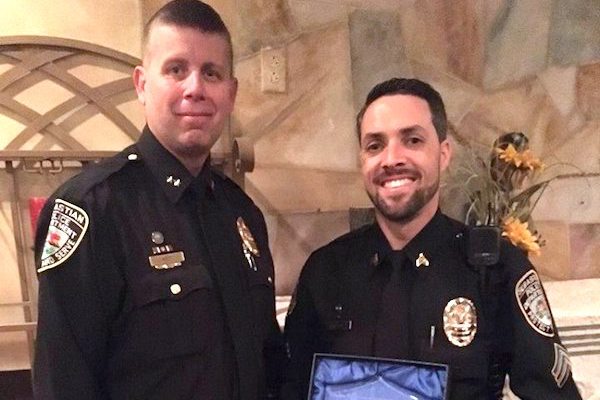 SEBASTIAN – Sergeant Timothy Wood (shown on the right in the image) has been selected as the Sebastian Police Department’s Officer of the year for 2016. Often Officer of the Year is bestowed on an officer or detective for a single event or heroic act that occurs by happenstance.

“Sergeant Wood was selected for the skills, performance, and demeanor he applies every day he comes to work. Just as unique, is that Sergeant Wood is in a supervisory position and was nominated by a fellow sergeant,” the Sebastian Police Department said in a statement.

Sergeant Wood’s performance has been outstanding during the past year. He was promoted from patrol officer to Sergeant in April 2015.

During his tenure as a patrol officer, he also served as a member of the SRT (SWAT), as a shift corporal and a field training officer. In 2016, he was appointed the supervisor responsible for the Field Training & Evaluation Program.

Above and beyond his full-time assignment of running a patrol shift, he not only oversaw and monitored the department-wide field training program, he also proposed changes and overhauled the entire program. This involved going to training, research, discussions with co-workers, drafting a detailed proposal, presenting a staff study (which was approved) and fully implementing the final product.

In addition, he was responsible for recruiting, interviewing and scheduling the training of an unprecedented number of new hires, eight, in just over a year’s period.

Sergeant Wood demonstrates the service-oriented policing philosophy in his dealings with the citizens of Sebastian, as evidenced in his attention to calls for service during his regular shift activities. He demands the same of his shift members. His personal enforcement productivity is at or above his contemporaries each and every month.

Just as important is Sergeant Wood’s work ethic and excellent teamwork. His performance is accompanied by an attitude toward the job, fellow employees and the community-at-large, making him a highly valued member of the Sebastian Police Department. He models the values we promote at the Sebastian Police Department. He has become a trusted source of information and assistance to his fellow co-workers.

During this past year, he has shown himself to be an exceptionally dependable employee and he is always willing to respond when asked to work extra time.

Sergeant Wood enhances the workplace by displaying his positive attitude and performance at work on a daily basis. His Commander reports that he has been a true pleasure to supervise and work alongside. It is for these reasons and many more that Sergeant Timothy Wood has been selected as Officer of the Year.