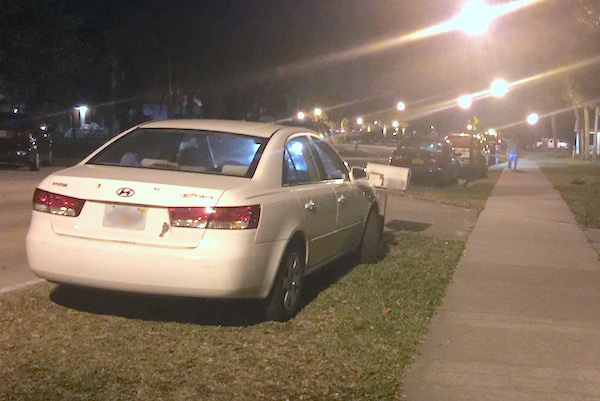 Vehicles are not allowed to park on the side of the road on Indian River Drive in Sebastian.

SEBASTIAN – Over the course of three months, there have been parking tickets issued to motorists who park near the sidewalk or the swales on Indian River Drive in Sebastian.

Some of the patrons at the Tiki Bar & Grill returned to their vehicles to find a $10 parking ticket. They argued that there are no signs posted. Since there are no signs, they assume it’s okay to park on the side of the road.

We contacted the Sebastian Police Department to learn more about the tickets and the alleged “no parking” signs.

“The sidewalk isn’t designed to handle vehicles, and parking by the swales isn’t safe,” police Commander John Blackledge told Sebastian Daily. “It causes damage not only to the grass, but it costs taxpayers money to fix the sidewalks. There are several safety factors.”

One of those safety factors is opening the car door on Indian River Drive while vehicles are passing. This is an area where the vehicle is parked in the swale or shoulder of the right-of-way.

The swales are broad, shallow channels along Indian River Driver that are part of the City’s stormwater drainage system. There’s a city ordinance (Sec. 98-33) that prohibits any parking in swales and the shoulder of the roadway.

We also saw a few signs posted in the general vicinity from Tiki Bar & Grill to Captain Hiram’s on Indian River Drive. The signs aren’t posted in the exact spot where motorists are parking, but they are posted in the area.

Blackledge told us that few people received a ticket, and officers “routinely ask for the vehicle to be moved instead of ticketing it.”

About 13 tickets have been issued since January, a lot of them near Earl’s Hideaway and Captain Hiram’s. About seven have been issued near the Tiki Bar & Grill and the general area for parking in violation.

We know this is a busy area near Vic’s Pizzeria and Tiki. Parking spots are hard to find this time of year, especially on weekends. But it’s safer to park in a designated spot off U.S. Highway 1 than it is on Indian River Drive.