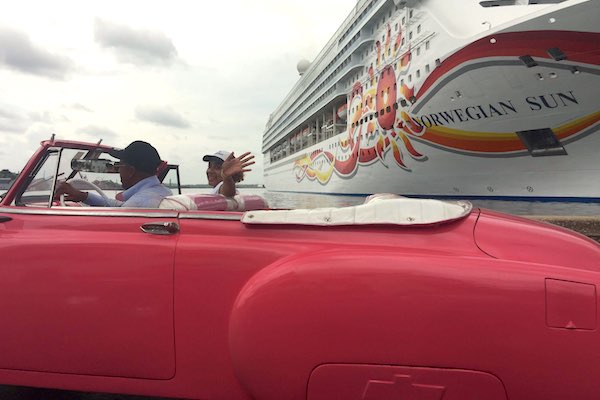 Several people from Sebastian and Vero Beach joined us for a Cuba Cruise.

SEBASTIAN – Last week, a group of 35 people from Barefoot Bay, Sebastian, and Vero Beach joined Sebastian Daily on a cruise to Key West and Cuba. They were the second group of passengers that made history from Port Canaveral to Cuba.

The group sailed out of Port Canaveral on May 14th onboard the Norwegian Sun cruise ship.

For the first night, the group had dinner on the ship at the Brazilian steakhouse known as Moderno Churrascaria. They brought out sausage, chicken, pork, lamb, steaks, filet mignon, and it kept going. Everything cooked to perfection.

The following morning, we made it to Key West where we walked Duval Street. We made stops at Sloppy Joe’s, Irish Kevin’s, Fat Tuesday, Margaritaville, and the Green Parrot.

Once back on the ship, we had dinner at their specialty Italian restaurant called Il Adagio. The chicken parmesan and lasagna was excellent. After dinner, the night was spent watching a show in the theater, dancing, and a comedy show.

The NCL Sun arrived in Cuba the next morning. The first thing we noticed was how dirty the water was in the harbor. It was dark with oil slicks. Then someone mentioned, “ever seen the waters near Michigan? You’ll see the same kind of oil slicks and dirty water.”

As the ship approached Havana, the city was stunning. We heard the horns blowing from all the classic cars in historic Havana. It looked like we traveled back in time, literally.

Entering the city for the first time was exciting. There were cars from the 1940s, 50s, and 60s everywhere. We couldn’t keep our eyes off of them. It didn’t take long before cameras were snapping pictures.

We rented three cars with drivers and drove all around Old and New Havana. Most of the buildings need a lot of work, but there were signs of repair. Our driver told us that the Cuban government is slowly making the much-needed repairs to the buildings.

We then made a visit to the famous Copacabana hotel in Havana. It’s like going back to the 1960’s. We couldn’t keep our eyes off the light fixtures and furniture. It looked like a set from the original Oceans 11 movie.

As we walked out of the Copacabana, there was a building across the street with Ernest Hemingway’s face. We know that in 1940, Hemingway purchased a home near Havana where he lived for twenty years. He also wrote “The Old Man and the Sea” at the same home.

That night, we had dinner at the famous Buenavista Social Club. They served a corn chowder soup, then our choice of pork, chicken, or beef. We all had the pork with brown rice. They served us ice cream topped with caramel inside a coconut shell. For drinks, we had water and mojitos.

Most people in our group loved Cuba. The people are very nice and a lot of them do speak fluent English.

There are some things you should know about Cuba, prior to traveling there. It’s very poor, but the recent increase in tourism is helping their economy. Also, the classic cars in Havana are from 1948 to 1959. They are breathtaking when riding around the city.

The Cuba cruise was very educational and we got to see a lot of the culture.

After leaving Cuba, we had a Sea Day and enjoyed a lot of the entertainment offered by the Norwegian Sun. We had dinner at Cagney’s Steakhouse. It was a great way to end the trip.

Sebastian Daily has another Cuba cruise coming up! If you’re interested, click on this link and fill out the form to receive more information. Deposits are only $1 until June 26, 2018.