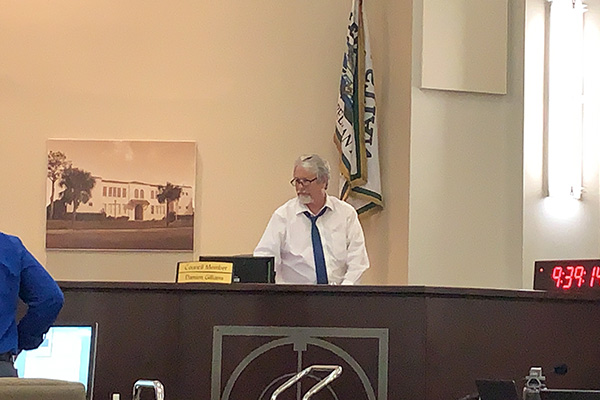 There was a special meeting Monday night that resumed from Thursday’s meeting request by Councilman Damien Gilliams. Tonight, there is now another meeting scheduled at City Hall at 6:00 p.m.

Councilman Jim Hill provided facts that he feels proves that there were no violations of the Charter on whether or not a special meeting request by Councilman Damien Gilliams was improperly denied.

For the first time since April 22nd, we heard what individual council members thought about the alleged “secret” and “illegal coup” meeting that was held.

When Vice-Mayor Charles Mauti spoke, he apologized to the residents of Sebastian.

“At this time I do want to apologize to the public for the actions I’ve took, and that’s my responsibility, I accept that,” Mauti said.

City Councilwoman Pamela Parris said it was her understanding there was going to be a meeting on April 22nd.

“Well, it was to the best of my understanding prior to April 22nd as confusing as it was that we were having a meeting here that evening, and I made it very clear that I strongly feel that meetings need to be held. I mean Judge Croom ordered the special meeting on April 22nd, and I don’t know, I’m really confused about the declaration to give this authority to the City Manager as far as canceling meetings. So, I personally chose not to hire an attorney because I truly believe that I haven’t violated anything, and I wanted to save the city that cost, so I represented myself at this hearing,” Parris said.

The council then heard 50 minutes of Gilliams presenting documents, which he felt proved that the Mayor and City Manager violated the Charter.

Gilliams continued to argue that the Mayor and City Manager took power away from “duly elected officials” when canceling meetings.

Mayor Ed Dodd then read something from Judge Croom’s order because it was challenged by Gilliams many times during his presentation.

“The Code of City of Sebastian is plain and unambiguous, and it is unaltered by the current affairs. It does allow the mayor to declare a state of emergency in times of public emergency. Therefore, the mayor’s act in this regard does follow the law, contrary to what Mr. Gilliams has been saying for the past 50 minutes,” Dodd said.

Hill then asked the City Council if anyone thought the April 22nd meeting was legal. The meeting was the alleged secret meeting that residents believe was nothing more than a coup to take over the City of Sebastian by Charles Mauti, Damien Gilliams, and Pamela Parris.

“I’m just curious if anyone here felt that it was a legally held meeting,” Hill asked.

The City Council members sat quietly for several seconds until both Gilliams and Parris chimed in and said it was a legally held meeting, despite the absence of Charter officials and other council members.

“I felt that it was legally held. It was advertised. There was people from the public. It was recorded, there was a majority here, a quorum,” Gilliams said.

Gilliams then told Hill that he had his “attorney on the phone” when he had the meeting.

But residents say if Gilliams and Parris thought that the meeting wasn’t canceled, why weren’t they dressed for it? Gilliams arrived wearing a hat and casual clothes.

“I’m shocked that he believe’s it was legal, these folks were fired. All of them. All of our Charter officers fired, just like that,” Hill said while pointing to the City Manager, City Attorney, and the City Clerk.

Gilliams has argued repeatedly that the City Manager did not give a 24-hour notice to cancel the April 22nd meeting, and it was canceled illegally.

Hill then played the video of the alleged secret April 22nd meeting when Mauti, Gilliams, and Parris removed and fired all city charter members and then appointed Gilliams as mayor.

Gilliams argued that the Chamber doors automatically lock themselves when entering. However, Mayor Dodd pointed out that when he arrived, after being told there was an “illegal meeting” taking place, he knocked, but no one would let him in. They left Dodd outside. When they finally let him in, he told the three council members that the meeting had already been canceled.

Gilliams told Dodd that the meeting was “illegally canceled” by the City Manager.

After refusing to leave the Chambers, Dodd called the police to report the three council members for having an illegal meeting without the Charter officers present.

Residents then had the opportunity to address the City Council about the April 22nd meeting, and the allegations that it was canceled illegally by the City Manager during emergency order.

“The emergency order. How long has that ordinance been in place? How many emergency orders have we declared in the last four years? Several. I can tell you from experience. And each of those orders, guess what it says? The City Manager may cancel meetings. This is nothing new, and this is not something that was bought up just to alienate three council members,” Former Sebastian Police Chief Michelle Morris said.

Morris said the emergency declaration that gives power to the City Manager has been going on for years. It’s been the protocol established at least since 2015.

Morris then pointed out that Graham Cox, Buzz Herrmann, Bob Bedea, and Bob Stephens, and Diana Bolton were all inside the Chambers during when the three city council members fired the city staff and appointed Gilliams as mayor.

“Why isn’t anyone called city staff and asked why they weren’t there? If Mr. Mauti and Ms. Parris thought there was a real meeting, why didn’t they reach out to the City Manager and asked,” Morris said.

“Why were the doors pulled shut to ensure they were locked? Why was somebody banging on the door and not allowed to come in if it was a legitimate meeting,” Morris asked the council.

Sebastian resident Grace Reed thanked Mayor Ed Dodd, Councilman Jim Hill, City Attorney Manny Anon, and City Clerk Jeanette Williams for protecting the city for the past month and a half. Reed also said the presentations by Hill and Dodd were “spot on.” She also believes that Gilliams did not call for a proper meeting.

“I really want to thank Mr. Gilliams from the bottom of my heart for taking 50 minutes of my life that I’ll never get back. And wasting them with a presentation that had nothing to do with the question at hand and was filled with antagonistic, finger-pointing, drama, and grandstanding. I feel that Mr. Hill and Mr. Dodd have proved behind a shadow of my doubt that he did not call a proper meeting ” Grace Reed told the council.

Christopher Nunn, who is one of the leaders of the PAC recall group Sebastian Voters Against Gilliams and Parris, mentioned that Parris had no intention on April 22nd to be at the meeting. Nunn said she posted it on her Facebook page.

“Ms. Parris made it very clear the day of the meeting that she had no intent of being here. I would like to know how she would know to be here for an illegal meeting. It’s kinda funny because on 4/22 she posted on Facebook ‘cancel me,'” Nunn told the council.

Following public input, at approximately 9:25 p.m., Mayor Dodd felt that the City Council could finish up the rest of the agenda items, so maybe they didn’t have to deal with them on Tuesday’s meeting.

However, Gilliams used the time to talk, dragging the meeting out to 9:50 p.m. Dodd didn’t see the meeting going anywhere, so he adjourned.

The next Sebastian City meeting is tonight at 6:00 p.m. at City Hall.