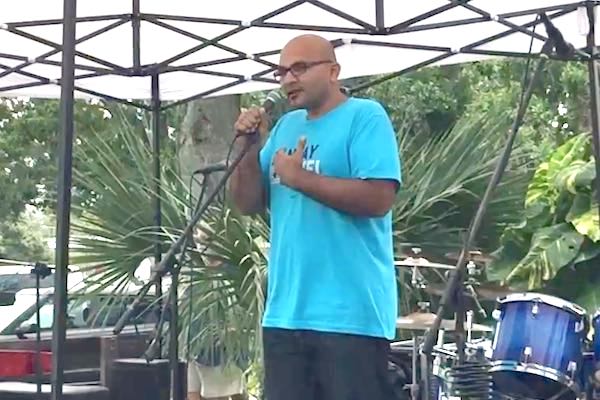 SEBASTIAN – Sanjay Patel and Nicole Haagenson spoke at the ‘Musicians Making Waves’ concert Saturday about the importance of voting.

Sanjay Patel is a Democrat running against U.S. Rep. Bill Posey, a Republican, for the U.S. House District 8 which covers all of Indian River County, Brevard County, and a portion of Orange County.

Patel spoke about the economy and the Indian River Lagoon.

“When we think about the people in power, they’re not listening or representing us. They’re taking in big money from businesses and corporations, and those are the folks they’re listening to,” Patel told a crowd at Pareidolia Brewing Co. in Sebastian.

Patel said that it’s an injustice to any family working full-time and still struggling to make ends meet.

She spoke about our local economy, education system, and the environment. She said the environment isn’t getting any better for the past two decades under a one-party rule.

The ‘Musicians Making Waves’ concert was the first event of its kind in Sebastian. The turnout was larger than expected.

Sebastian Daily and the Pareidolia Brewing Co. does not endorse any candidate or political party.

Firefighters and Firetrucks Day in Micco