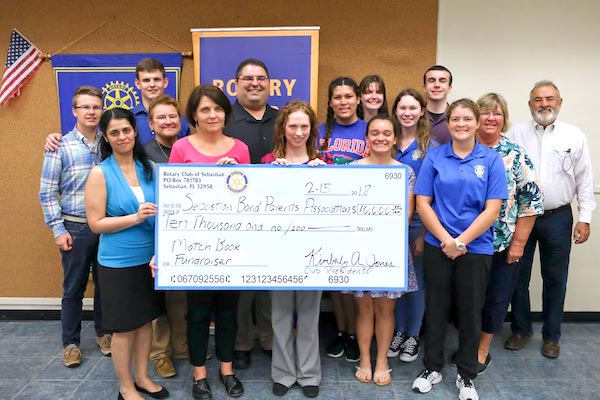 SEBASTIAN – The Foundation of the Rotary Club of Sebastian donated $10,000 to the Sebastian River High School Band Parents Association. Band Director Ashby Goldstein, Band Boosters President Mamta Lulla, Band Parent Representative Michelle Land as well as some students who are in the band were all present to accept the donation.

Back in May of 2017, the band’s trailer was stolen along with its contents estimating to be worth $10,000. Additionally, the band tower was condemned because of rust issues, and its replacement cost was estimated to be $33,000.

The Rotary Club of Sebastian’s Foundation saw an opportunity to help. Spearheaded by Rotarians Jane Burton and Brian Carman, the Foundation partnered with the SRHS Band Parents Association to create a matching fundraising campaign.

The Rotary Club of Sebastian is excited and honored to support the band and its endeavors at Sebastian River High School. They are the second oldest of the five Rotary clubs in Indian River County and were founded in 1988. This organization seeks to make lasting improvement in communities and around the world. It focuses its projects primarily on children.

They make annual donations to:

The Rotary Club of Sebastian’s projects are funded through grants and our two annual fundraisers – the ShrimpFest and Craft Brew Hullabaloo held this year at Riverview Park in Sebastian March 16-18 and our annual golf tournament that takes place in December of each year.

For The Love Of Paws Fundraiser at Earls Hideaway

For The Love Of Paws Fundraiser at Earls Hideaway