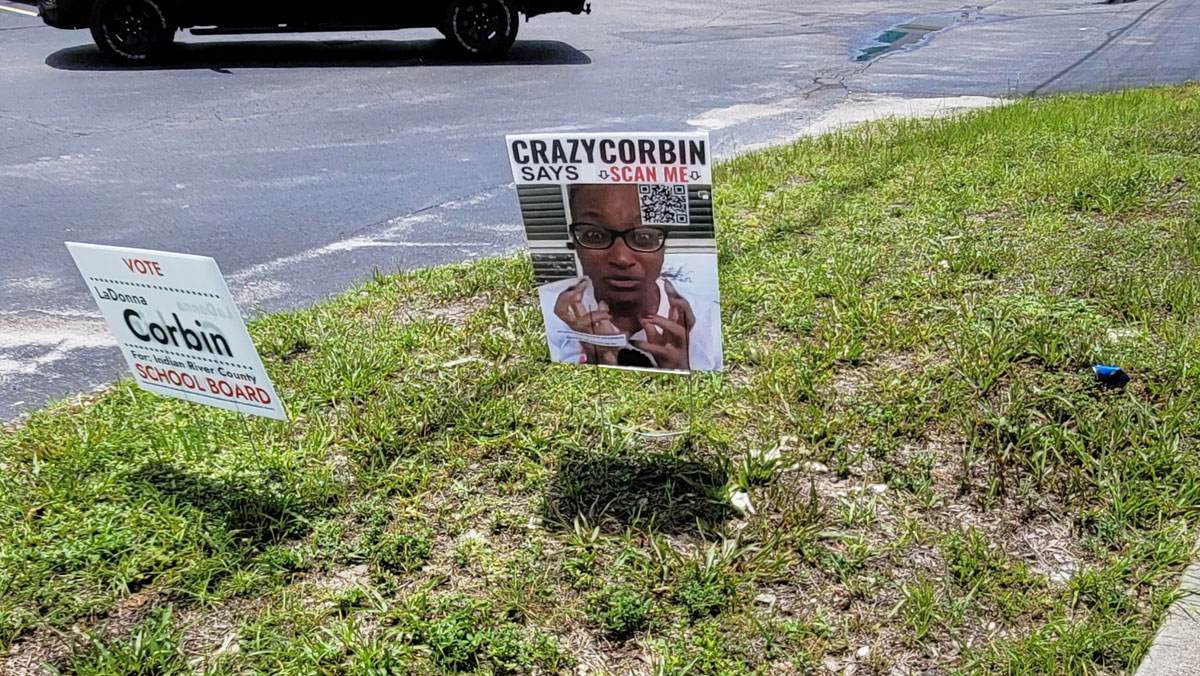 At least one property owner wishes to prosecute those responsible for trespassing who placed the signs on their land. Placing political signs defacing a politician on property without permission is a punishable offense in every state.

Sheriff Eric Flowers told Sebastian Daily that when a property owner supports one candidate, and then someone else comes along and places a sign opposing that candidate, they could file a criminal complaint for trespassing.

Over the weekend, one person on social media admitted to placing the “Crazy Corbin Says Scan Me” signs in the county because he supports one of her opponents. In addition, the defaced signs were placed in areas with surveillance cameras. Law enforcement could also use the video footage to complete its trespassing investigation.

Last week, law enforcement opened an investigation when a property owner wished to file trespassing charges. Deputies also found a hidden camera pointed to one of the “Crazy Corbin Says Scan Me” signs as if someone was trying to catch anyone removing it. The signs have a QR Code that takes people to a TikTok video she recorded earlier this year before deciding to enter the school board race.

But supporters of Corbin’s opponents have been on the move with re-publishing the TikTok video hoping to sway voters away from her. There are also social media postings, mostly by people who support Rosario, who question Corbin’s mental health.

Corbin told Sebastian Daily that she’s not a politician but has been transparent from day one, and that’s why she never deleted the video or her social media postings after deciding to run for the school board.

“I was not making fun of anyone or anything. I was just having fun with myself if that makes sense. This entire thing is saddening to read what people are saying, and I try to stay away from it, but again it is social media,” Corbin said.

Veteran journalist Russ Lemmon of Lemmon Lines says Corbin’s opponents and supporters have created a “smear job” in a “classic one-sided political attack.” According to Lemmon, Corbin is the biggest threat to her school board opponents in District 2, leading to the most money raised in Indian River County.

Corbin, who has eight children, is a wellness coordinator for Treasure Coast Community Health and advocates mental health awareness. She is also involved with the First Community Partnership School serving Dodgertown Elementary.

She received a Bachelor of Science in Social Science from Mercer University with a Concentration in Mental Health and a minor in Education. She also earned a Master’s Degree in Health Policy and Ethics from Strayer University.

School Board Races and Attacks

Over the years, Sebastian Daily has seen repeated school board races that don’t end well for candidates and their supporters launching attacks against opponents with signs or on social media.

Citizens in Sebastian especially don’t like political attacks because they feel it’s spreading “hate” and civil discourse. In previous races, people have sided with the candidate under attack, regardless of their endorsements.

While Corbin’s opponents may feel they are helping their candidate, they may be hurting them if we look at past school board elections.

However, Rosario supporters feel they are not attacking but are making voters aware of her opponent. They said Corbin has a “history of mental illness” and therefore have legitimate concerns about her being on the school board.