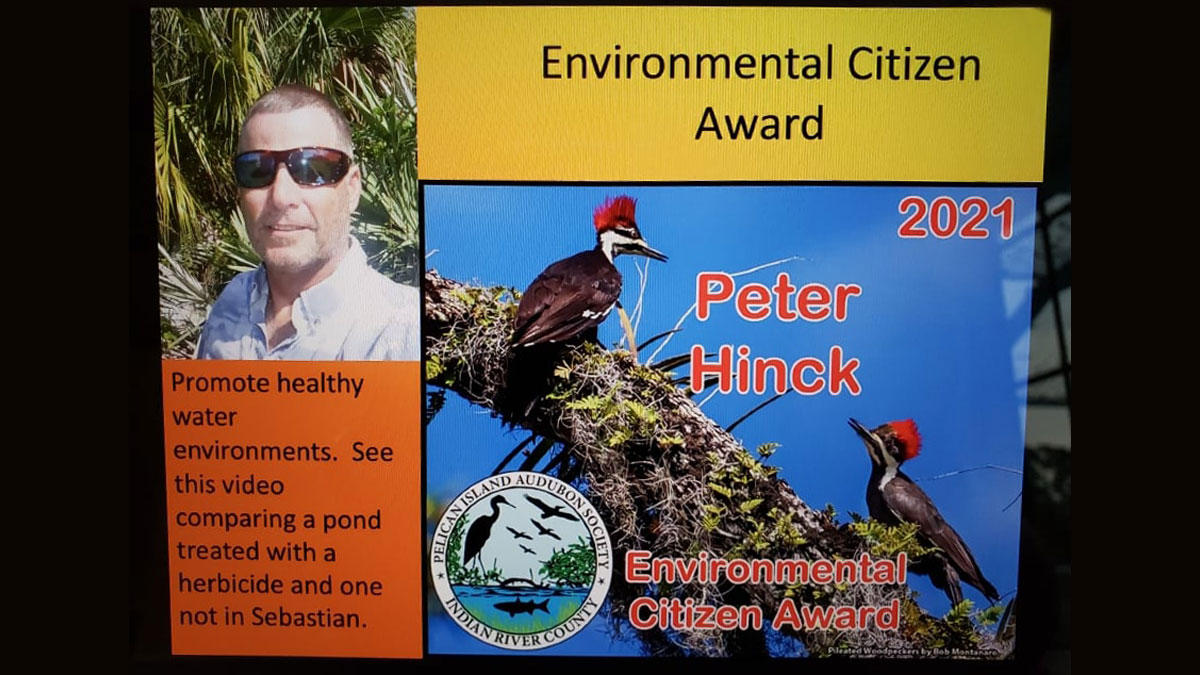 The Pelican Island Audubon Society is facing public scrutiny after they allegedly honored a local man who created a propaganda video with misinformation about weed killer spraying in Sebastian.

According to Peter Hinck, the nonprofit organization gave him the Environmental Citizens Award for 2021 and encouraged people to watch the video entitled “The Tales of Two Lakes” on YouTube.

In the picture of the award, it states “Promote healthy water environments” and asks people to watch the video comparing a “pond treated with a herbicide and one not in Sebastian.” We still don’t know what lake Hinck is referring to.

However, experts say Hinck is trying to compare a lake with a pond, two completely different bodies of water.

In the video, Hinck says the Historic Pond was sprayed with weed killer on the outer banks, and alleges the lake has never been sprayed. He never gives the location of the lake.

Hinck then suggested that the sprayed pond on Schumann had continued growth of algae and a problem with “muck” on the bottom. We visited the pond again and didn’t see any algae growth since the last time we inspected it.

When recording the Historic Park Pond’s video on Schumann Drive, Hinck continued to focus on a small area of the green substance in the pond. However, he never did the same “close-ups” on the mysterious lake. All camera angles of the lake were done from a distance.

We reached out to Brian Benton, who serves as the Leisure Services Director for the City of Sebastian. Benton put us in touch with the contractor handling the spraying at the Historic Park Pond on Schumann drive.

“The pond was treated once with the herbicide Clearcast and a surfactant Sun Energy. Clearcast is a slow-acting herbicide that has very good results. The algae in the pond is from the decaying cattails, as well as clippings from the mowers. I looked at the pond yesterday, and the cattails are breaking down nicely. Submerged vegetation in the pond is very limited, chara, niad, hydrilla etc. For the time being, there will be extra life in the pond due to the food source “cattails.” The pond will clear over time if it is well maintained. After the nutrient level finally bottoms, the pond would be a good candidate for inoculation with native plants more fitting, Spikrush, Duck Potato, bulrush and pickerelweed. Cattails should not be allowed to dominate urban ponds for many reasons. Safety and seed bank reduction. The algae is doing its job and should not be treated at this point,” City Engineer Kenneth Griffin said.

Kim Haigler, the Environmental Planner/GIS Specialist for the City of Sebastian, watched Hinck’s video and found it to contain scientific inaccuracies, beginning with the title “The Tales of Two Lakes.”

“I cannot speak of the undisclosed second ‘lake’ presented in the video; however, the Historic Park Pond is most definitely a pond and not a lake. At less than an acre in size and approximate 6-foot depth, light penetrates the substrate throughout, and there is no opportunity for stratification. I circled the entire lake and observed no foul odor indicative of a harmful algae bloom. A handful of large aquatic turtles watched me from the water, and fish were evident as they splashed when I approached the shore for a sample. A little blue heron was feeding along the shoreline for the duration of my visit. There was a variety of submerged vegetation visible along the shoreline, including naira and chara, but no singular dominant species. The open water was also a light green tint in color. There were no dead fish or aquatic animals of any size observed along the shoreline,” Haigler said.

“The ‘algae bloom’ shown in the video actually only covers about 20 square feet of the pond, located in the northwest nook (windward) where the water is the most still. It has not formed a thick mat. This algae was also present only within a few inches of the dead vegetation in other areas of the pond. I collected a sample of the surface algae material, and when observed under a microscope, there were at least three different species of microscopic green algae and duckweed present. All were fairly equal in abundance,” Haigler explained.

So, what is the bad “muck” that Hinck talked about in his video?

“The ‘muck’ presented in the video is a natural indicator of a hydric (wet) soil. Upon my observation, the muck had a greasy texture, which is indicative of healthy soil microbes breaking down organic material. The muck is approximately 3 inches thick, which also is healthy and normal,” Haigler added.

Furthermore, Haigler said the pond on Schumann does not connect to the Indian River Lagoon nor the St. Sebastian River.

The video by Hinck prompted residents to contact Sebastian Daily since we already debunked most of the prior misinformation about the Historic Park Pond near Schumann Drive.

We wanted to know the location of the lake that Hinck alleges was never sprayed. Unfortunately, he declined to tell us. We then informed Hinck that our readers want to know because they believe it’s essential, but he still refused.

“I am so glad to see that your readers are so interested in the lake video. Please tell your readers to do as I suggested in the video and go look at lakes and canals around them and compare sprayed to the non-sprayed bodies of water,” Hinck told Sebastian Daily.

“Tell them to look for a lake with green and growing vegetation in and around the shoreline,” Hinck added.

Since there is no base for Hinck’s assumptions, we can only conclude that the Pelican Island Audubon Society honored a citizen for creating a propaganda video that could mislead the people in Sebastian.

We reached out to the Pelican Island Audubon Society by phone, email, the contact page on their website, and Facebook page. A few days have gone by, and we still haven’t heard anything from them.

Unless Hinck has done water tests or has control of that lake, how would he know if it was never sprayed? Science does require control, and without that, the video is suggesting propaganda and misinformation.

Where are the tests to back up Hinck’s claims? A “gut feeling,” as he put it in the video, is not science.

The fact is, the City of Sebastian is no longer spraying glyphosate, found in Roundup, and are using best management practices like all other municipalities and counties across Florida.

The City of Sebastian is using alternative methods such as mechanical harvesting and is currently testing other products.

If the Pelican Island Audubon Society truly honored Hinck with an Environmental Citizens Award, they did so without any scientific data. It’s a blow to their credibility.