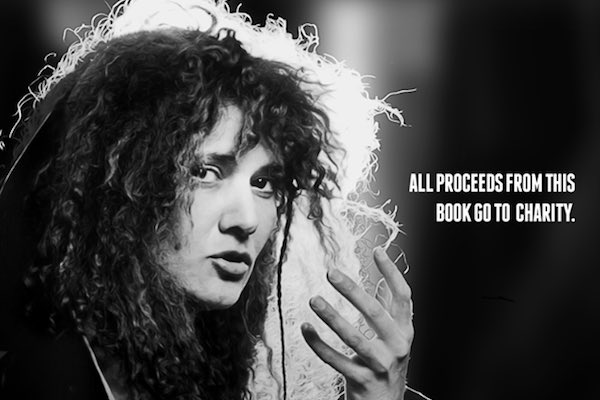 Nevard Tellalian is promoting a new book based on real stories when she was a full time working musician for many years.

SEBASTIAN – A couple of weekends ago, Nevard Tellalian made an appearance at Riverview Coffee, Tea, & Books in Sebastian.

Tellalian is promoting a new book based on real stories when she was a full time working musician for many years. Many of the stories are funny, and entertaining, and some are not so pretty.

In a searing, tell-all memoir, MUSICAL ROAD KILLS: And Other Tales. Some with Morals, Some Without, Tellalian shares with readers the truth of what female musicians endure–the harassment, the struggle for recognition, love on the road, etc.

Tellalian’s been stalked, groped, screamed at, recorded, applauded, ravaged, and screwed. Over her decades on the edge of rock, she has seen, heard, and done just about everything (even played at a wedding–once).

From her early touring days, she’s made music with a lot of superb musicians–Don Covay, Pinetop Perkins, Willie Dixon, Cub Koda, and Muddy Waters among them–and made love to a few, including Jeff Ross Hyman, better known as Joey Ramone.

She invites readers home to meet her rather astonishing parents, the Judge and Margo, who absolutely adored each other and oddly didn’t seem to mind their daughter’s choice of putting food on her table via music (they would come out to see her bands well into their eighties.)

An Interview with Nevard Tellalian, author of MUSICAL ROAD KILLS:

Do you think it’s more difficult for a new artist to breakthrough today without being influenced creatively and financially by the corporate record labels?

I haven’t actively been a part of that industry since the mid 90’s, but I still have friends who are full time musicians. I can tell you that it’s more difficult to make a living now than it was in the past. Deals from labels are even worse than they used to be. The artist doesn’t really make much of a living through selling records…even millions of them. More money is made through performing live and that is pretty darn expensive for a musician. The more and farther you travel, the more expensive it becomes of course. It’s always been tough to get away with any kind of creativity that doesn’t fit in with whatever happens to be the formulaic corporate glop of choice when you’re doing it. It makes it difficult to make a living and almost impossible to forge any kind of known presence. Truthfully, the great days of the recording industry A&R people are over.

Is music today too safe and packaged for the masses? Do you see any social or political activism today amongst the younger generation of musicians?

Any kind of music that gets a ton of airplay is packaged for the masses. It began to turn that way in the 60’s and by the time the mid 70’s rolled around it was over. They are well known for aiming their most strenuous marketing toward the lowest common denominator. And no, I don’t see much social activism today. According to the research done by Paul Watson, Popular Music is becoming dumber, duller and more homogenized than ever before. This isn’t a matter of taste or subjective opinion…it’s an objectively provable fact. A ten-year analysis of songs that spent more than three weeks at number one on the Billboard Charts found that song lyrics are getting measurably less intelligent. Chart toppers in 2006 read at a third to fourth-grade level. Ten years later, the intelligence of song lyrics has dropped by an entire grade. The way this trend’s going, in a few years, song lyrics won’t even be a challenge for seven-year-olds to understand. Researchers in Spain, using a million-song dataset, have discovered that pop music has become blander. They have found that producers are “baking volume” into songs at the production stage, making them artificially louder. This over compression has the effect of sucking all the dynamics out of a song. Everything is beginning to sound the same; individuality is being drowned out. In fact, pop music is now so devoid of originality that producers are using computer algorithms to determine what track will be commercially successful. Consumers, it seems, want to be in a bubble wrapped coma.

The #MeToo movement highlights the prevalence of sexual assault and harassment of women in various industries, including the music business. In the book, you share stories about flirtations and hanky panky with fellow musicians. Did you ever feel harassed by men who had power over your career?

Yes, I did. The music biz is still ruled by the “Boys’ Club,” but it doesn’t exactly have a human resource department. I never minded any flirtations or hanky-panky from other musicians, but the record people?–No! The casting couch does exist. I can remember getting the business from some of that breed…mostly label reps of one sort or another. I’d always tell them off then and there. Did my career suffer becaus e of it? Most likely. Did I care? Nope.

Today, artists file lawsuits against other musicians if there’s even a chord that sounds similar to one of their songs. You say that instead, artists should be flattered by a little creative imitation. Don’t you think that artists should have a right to protect their work and legacy from others trying to turn a profit?

Many of the songs that are big hits today are produced by one of the same four producers each and every time. They’re busier than ever suing each other, but rarely do these useless suits ever actually win. The sameness of all these songs are done purposefully, to turn the public into bendable little buying lambs. I do think that artists, up to a point, should be flattered by some imitation. After all, let us never forget, everything is derivative…everything.

Half the proceeds from my book will be going to the Lymphoma Research Foundation in honor of Joey Ramone… and yes, I loved him. His real name was Jeff Ross Hyman; I always called him Jeff. I didn’t particularly like the name Joey because it sounded to me like the name of some prepubescent kid on a sitcom. I feel very protective of him. He was hurt by too many people; even people that he loved. He was so sweet, yet he was taken advantage of by some. He was very secretive about our relationship and I didn’t understand why until years after he had died.

There’s a lot more in the book. It’s a great read!

Tellalian was born and raised in Connecticut, starting playing piano by ear at age five, and became a professional musician, bandleader, and songwriter before twenty. She worked in marketing and business for a while, but came back to music. She now lives here in Florida.

Heat index to soar this weekend in Sebastian, Vero Beach