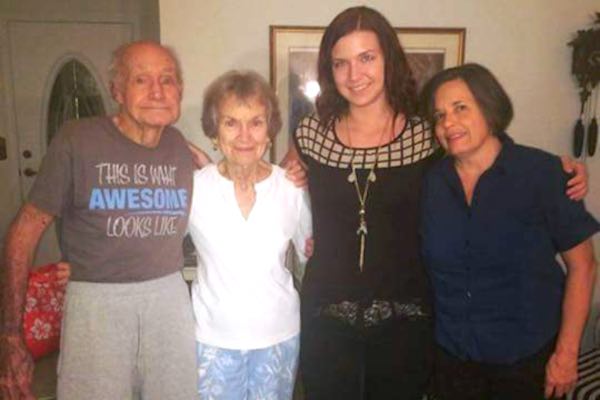 Clyde D. Adams (left), known as Mr. Awesome, died yesterday at the age of 93 in Sebastian.

Adams was the man who used to walk and run in his white shorts every day here on CR-512 in Sebastian. There were times he also picked up roadside trash as he walked.

Daily commuters always saw Adams either in the running path or the center median doing his thing.

“Clyde was our neighbor in Palm Beach Gardens before they moved to Sebastian. I used to run with him in the morning when he was logging 10 miles a day,” said Beth Brown.

“We were together every evening for Happy Hour on their front porch and we became family. The day they moved, half the neighborhood sat in their driveway shedding tears of sadness,” Brown added. “Clyde was an honest, good-hearted, hard working man who brought a lot to this world. We will forever remember and love him.”

I first noticed Adams when I moved to Sebastian in 2002. There he was running without a shirt on.

He would often wear shirts that said “This is what awesome looks like,” and there were times I saw him wearing a hat.

Adams was a World War II P.O.W and Korean War veteran. His children also say he was a great dad.

Rest in peace, Mr. Awesome. You will be missed.