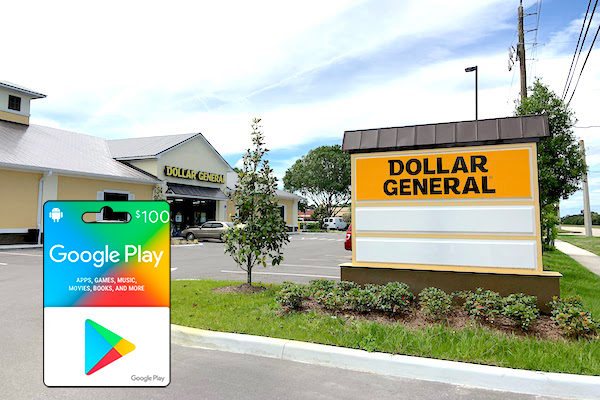 Dollar General cashier stops a sale of a Google Play gift card to save a woman from a scam in Sebastian, Florida.

SEBASTIAN – When Facebook asked a local woman to put $100 on a Google Play gift card, the cashier at a Dollar General in Sebastian told her it was a scam.

Nahir Hoffman recently had problems with her Facebook account, so her husband, Bruce, searched on Google to locate their customer service number.

“When Nahir was having issues, I said, ‘let’s just Google the numbers on how to get in touch with Facebook.’ Well, I gave her all these numbers I got off of Google,” Bruce Hoffman told Sebastian Daily.

Nahir Hoffman called and left a message with one of the numbers that her husband gave to her. A man from Facebook eventually returned the call.

“So, the guy calls me back, and I told him I just transferred to a new phone, and I opened a second Facebook account by mistake, and I just want to delete the new account and go back to the old one,” Hoffman said.

The man on the phone told Hoffman that he wanted to verify her name, address, email, and other information.

“He goes on and on, and of course I’m giving him all this information because I think he’s from Facebook,” Hoffman explained.

She thought something was strange when he said his name was Steve Edward because he had a thick foreign accent as if it was someone from Nigeria.

“So he said I’m going to send you some verification codes because both accounts had the same name, address, and email. He had to identify by another source,” Hoffman recalled.

The man explained to Hoffman that he was going to send her a verification code on her mobile phone, a process to verify her identity. He tried twice, but nothing came through on her phone. Since that didn’t work, the man then told Hoffman they needed to try and verify a different way.

“He asked me if there was a store like a Dollar General nearby, and I told him there was one right down the street, and that’s when he told me I need to go over there and buy a refundable $100 Google Play Gift Card,” Hoffman said.

The man told Hoffman that buying the refundable Google Play Card will verify her location in the zip code shown on her Facebook account.

The man stayed on the phone with Hoffman as she drove to the Dollar General at the corner of Fleming Street and Sebastian Boulevard.

“So I asked the lady where I can buy a Google Play card, and it’s right there next to the register. As soon as I get my credit card out, the cashier asked me ‘who’s on the phone?’ … I told her it was Facebook, and she says ‘no it’s not,’ and I said ‘yes it is’ and that I’ve been on the phone for almost an hour and want to buy the Google Play card,” she said.

Debbie Hovase, the cashier and a manager at Dollar General, told Hoffman that she wasn’t going to allow the purchase because it’s a scam. Hoffman argued with Hovase for a few minutes.

“She said ‘hang up the phone,’ and now I’m nervous and start crying. So the lady [Debbie Hovase] asked me to calm down and don’t be upset. She starts telling me, ‘listen, I work here, and I see this every day,'” Hoffman said.

Hovase immediately gave Hoffman a number to report the fraud. At the same time, the alleged Facebook employee calls back. Hoffman told the man on the phone that they were calling the police. The man hung up.

Hovase told Hoffman that people are always falling for these scams and trying to buy Google Play cards.

It’s a fact that this Dollar General store in Sebastian is looking out for people in our community who fall victim to similar scammers.

The new Dollar General store is located in a plaza where the vacant Exxon gas station used to be on Sebastian Boulevard. The Exxon building was torn down after it was vacant for several years.