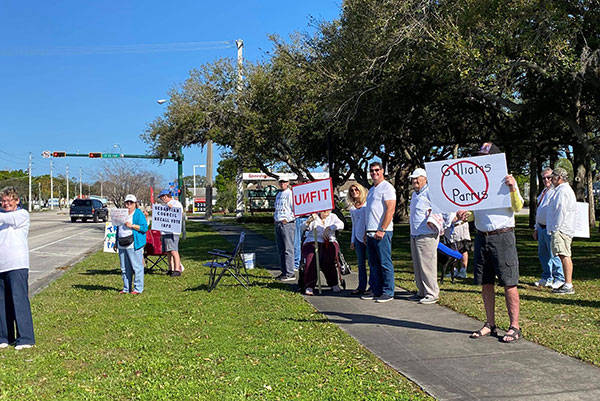 Sebastian Voters Against Gilliams and Parris

Gilliams said he was just bringing water to the protesters and thanking them all for assembling and speaking their mind. Members of the group said it didn’t take long before he confronted them about $500 fines per sign.

“He threatened us with fines, which we know is not true. He’s got a group of people who have been watching us today, but we have all been very calm. He did try to come over here and stir us up,” Tracey Cole told Sebastian Daily.

Wearing a hat and a green jacket, Gilliams showed up with the water and to answer any questions. Members of the group felt the councilman was only there for a photo op and to control the protest.

“We didn’t ask him to come here. He’s trying to control the protest just like he tries to control the City Council meetings,” a Sebastian resident said.

But Gilliams said he wasn’t trying to threaten anyone; he was educating them about the Florida elections commission.

“When you have signs, and you’re part of a political action committee, you’re supposed to put the disclaimer on it,” Gilliams wrote on Facebook.

Gilliams was seen pulling an ice cooler, but was met with laughter.

“I got free water! This is Democracy! I love it! Free water,” Gilliams told the group.

“How can you say you’re going to take care of this community when you can’t even take care of your own property,” a man asked Gilliams.

However, Gilliams ignored some people and tried to avoid some of the questions.

“Have you ever watched one of the meetings? That’s why we’re out here today,” Sebastian resident Michael Frank told Gilliams.

The group said they remain upbeat, while Gilliams was present. A couple of videos have surfaced showing motorists waving and honking to show their support for the recall.

“There are a lot of people seeing us, and they’re honking, so we’re getting the word out,” Cole told Sebastian Daily.

Gilliams argued that as a newly elected official, he has a right to speak on the dais without being interrupted by Mayor Dodd.

Mayor Dodd has interrupted Gilliams whenever he’s disruptive or making more allegations about the sugar sand.

The group is planning to be at the City Hall building on Wednesday, February 26, 2020 just before the 6:00 p.m. council meeting.

The concerned Citizens are part of the Sebastian Voters Against Gilliams and Parris Facebook group. The group is gathering more info about the two city council candidates to prepare for a recall, which they say could begin on May 20, 2020.