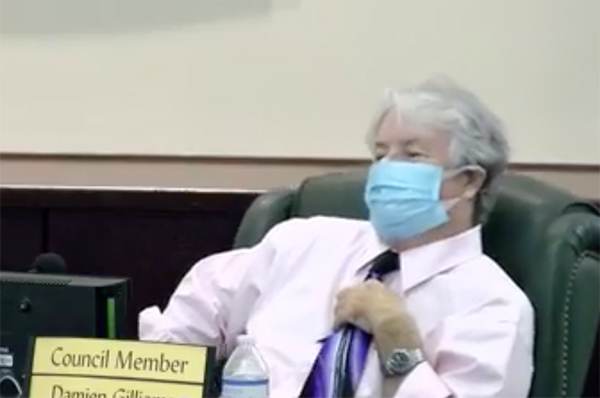 Citizens fear that Gilliams is purposely trying everything he can to win an argument to remove Dodd as mayor, fire staff, and appoint himself as mayor as he and two other council members did during the illegal meeting on April 22, 2020.

Council members Charles Mauti, Damien Gilliams, and Pamela Parris are still part of a criminal investigation by the State Attorney’s Office for breaking Sunshine Laws during the nonpublic meeting.

So far, only Vice-Mayor Mauti has been charged with Public Order Crimes. He has a court hearing on June 16, 2020.

All three council members are also facing a lawsuit by an attorney defending the Sunshine Law, which could cost city taxpayers a few hundred thousand dollars to over a million dollars in litigation.

Gilliams was disruptive for most of Wednesday night’s meeting by questioning everything that Mayor Dodd said during the workshop discussion.

During the meeting, Mauti told Mayor Dodd that he received a preliminary plan for the Spirit of Sebastian, showing small lots with more housing, which is creating a lot of rumors.

When Mayor Dodd asked the city attorney to check on the rumors, Gilliams interrupted.

“So, you’re giving direction to the city attorney, or is there a consensus? Is that a consensus from the council or are you doing it,” Gilliams said.

It’s an important issue because the city staff and other council members haven’t seen any preliminary plans for the development. The plan has not been presented yet. Mauti agreed to provide a copy of the plan to the city attorney.

Towards the end of the meeting, Gilliams said Mayor Dodd violated the Charter a second time by shutting down a meeting 10 minutes early on May 18, 2020.

“You don’t have the unilateral authority and the veto power to shut a meeting down in the middle of somebody speaking, especially when there’s 10 minutes left,” Gilliams said.

Gilliams then said he wasn’t sure how much more the council wants to proceed with the mayor.

“I’m not sure how much more council wants to proceed with one of our leaders just constantly shutting it down in the middle of when you’re speaking and violating our Charter. It’s very clear you cannot do that. You’ve done it twice within the past two to three months,” Gilliams said.

Gilliams made similar comments in the past leading up to the April 22 meeting, even when the Charter was never violated. Dodd then addressed Gilliams.

“I am going to talk about the threat that Mr. Gilliams just threw at me again to remove me from the council, from the mayor’s seat. You can’t do it,” Dodd told Gilliams.