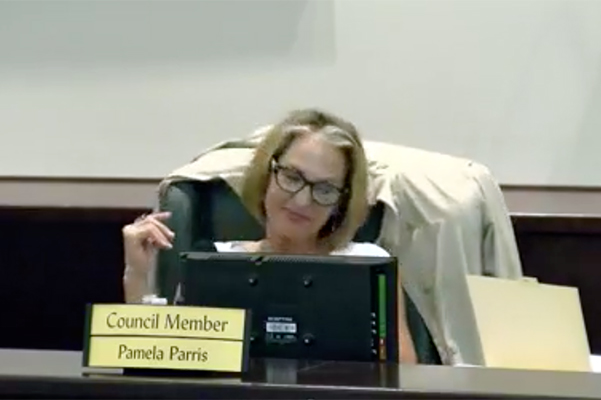 Sebastian Councilwoman Pamela Parris is asking to have more workshops for citizens to ask questions during an open-minded roundtable with the council. She stated it’s also a great way for her to defuse comments about the council becoming a circus.

Dodd asked Parris for clarification on what she’s asking for since workshops usually cover a topic. She’s also asking to have them every other Wednesday between City Council meetings.

Sebastian Daily recently made a public request for Parris’ city email and phone records and did not see a large number of citizens contacting her “all day long” about issues. There are a couple of emails asking for her resignation.

Councilman Jim Hill mentioned that the public can already provide input during the meetings and that each council member can address topics during their matters on the agenda. He did agree that some items could be workshopped, and he’s open to that, but he’s not in favor of calling a workshop without a proper reason.

“I am not in favor of calling a workshop and then just creating a reason to have it. That’s just ludicrous and a waste of time. It’s not only a waste of this council’s time; it’s a waste of our staff’s time because the staff has to be at all of these meetings as well. So, it’s an absolute waste of time when you have every opportunity in the world to speak under your matters at every council meeting, and then if you feel that something is important, you can say ‘we should workshop this.’ And you know what, I might even agree with some of those things,” Hill said.

While still no topic on what a workshop would be, Parris gave further explanation on what it might be.

“I’m actually trying to defuse some of the, eh, comments from some of the citizens saying that the conduct on this council, well, for lack of using their words, is a circus. So, I thought maybe if we’re to come to some understanding in between, it may eh, be a little more dignified here and a better city image,” Parris said.

Citizens at the meeting said the council should be more dignified with or without a special workshop.

Dodd stated that there were a number of other issues that he feels should be workshopped with citizens, such as the Annexation, the future land use map, and even clay at the tennis courts. But he also said the city has other committees, such as Parks & Recreation, that could be better at handling certain issues by their committee having the workshop instead of the city council.

Dodd agreed that having workshops on issues can help with the decision-making process, but he’s opposed to having too many workshops because they could become meaningless. He pointed out that every council member can have discussions during the meetings, under their matters, and the public can already provide input.

“Workshops are good, it defuses the situation before they become problems,” Gilliams said, referring to the Graves Brothers Annexation.

The meeting went on for 35 more minutes about issues with the bidding process, financials, integrated pest management, and a garage project at the Sebastian Municipal Airport.

Gilliams said that if the previous city council had workshopped the Annexation issue instead of passing it during a hurricane, the city wouldn’t have hundreds of thousands of dollars in litigation.

Dodd disagreed, reminding everyone that there were several presentations given to the public about the Annexation. It was a process that the city council had to follow.

“You’re trying to strip government around the process that you’re unhappy with,” Dodd told Gilliams.

Some residents also expressed their disagreement with Gilliams, bringing up that he is one of the three council members being sued for breaking Sunshine Laws that could cost the city millions in litigation.

Then, Parris came up with a topic they could use for a workshop. She mentioned the garage project at the airport, which Gilliams brought up.

“My motion is to compromise and agree that the workshops are beneficiary to have them on demand, if you would, starting with the garage project since it’s already a process,” Parris said while looking at Gilliams.

“I’d like to get some definition when you say workshop, are you talking about a workshop on the entire bid process or just on the moving forward on the awarded bid,” Dodd asked Parris.

“Most likely the entire bid process, but we can do another workshop if it’s necessary. Two workshops are fine,” Parris replied.

Gilliams then said he saw a lot of issues with the bidding process and wants to have a workshop to determine if the project was done right. Dodd and Hill disagreed on having a workshop to litigate on what the previous city council already approved.

Parris then asked, “see how the workshops could shorten our meetings?”

“I’m just not comfortable opening that up to a public workshop,” Dodd said.

Hill brought up that having a workshop about the airport garage isn’t even on the meeting agenda.

“The agenda is whether we’re going to have a workshop every other meeting, that’s what’s on the agenda,” Hill said.

Parris then changed her motion on having a monthly workshop and decided to have a workshop about the airport garage.

When Dodd asked Parris to set the parameters for the workshop, she sat quietly for a couple of seconds before asking, “could I ask for Mr. Gilliams help with that? I’m sorry, I’m not experienced with that.”

Gilliams then said he wanted to review how the bidding process was handled, which is all against the advice of the City Attorney. The City Attorney wanted time to determine whether the council can have a workshop about a project already awarded.

Mauti also agreed with the City Attorney and said the council should give him time to research whether they are allowed to address the project during a public workshop.

“I’m not interested in hearing from the attorney on this issue unless he can prove that we’re doing something illegally wrong in writing,” Gilliams said.

Citizens at the meeting then provided public input to express their disappointment on how the meeting was going.

“I’m trying to figure out how we expect to move forward and get any council business done if we’re going to constantly reevaluate every contract, and every bid, and every worker, and every whatever … that was completed before each set of new council members come in. Because if that’s the case, we’re not going to get anything new done in this city, and we have a lot to do,” Sebastian resident Sharon Herman told the council.

Herman said there’s a lot of things to do, adjusting with the COVID-19 pandemic, and people out of work in Sebastian.

“We’re still not getting anything accomplished, it’s 9 o’clock, and it’s still the same rhetoric,” Herman added.

Another Sebastian resident suggested there is collusion on the council because each time Parris or Gilliams makes a motion, they know the other will immediately second it.

“When city council people are up there, they should be working together, and I think it’s appropriate if one council member has a question, they ask another council person to assist them because all five of you should be working together for the betterment of the city. And I think it’s important if the attorney wants time, a reasonable amount of time, to check something out. I think that’s important,” Herrmann said.

Gilliams then wanted to plan a workshop while they wait for the city attorney to provide a legal opinion on whether or not they are violating the bidding process for the airport garage.

“I already made the motion, Mr. Mayor. The workshop gets set between the 10th, and the 24th,” Gilliams said.

When Dodd asked if they had a second on the motion, Gilliams looked at Parris and said, “Pam. Pay attention!”

Parris then said she was on her phone.

As they were doing a vote to schedule the workshop, Gilliams surprisingly voted “no,” to not schedule it. The only council member who voted “yes” was Parris.