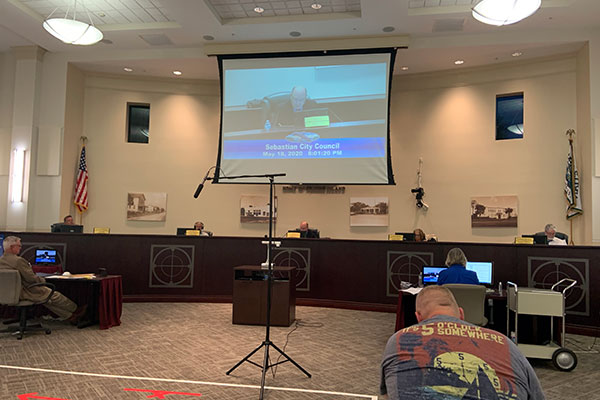 Sebastian Councilman Damien Gilliams bowed to public pressure and withdrew his proposal to fire City Attorney Manny Anon without cause.

Overall, after nearly 10 hours of discussion and three special meetings that ended Tuesday night. The council voted 3-2 that Gilliams was not improperly denied a request for a special meeting on April 24, 2020.

Since last week, Mayor Ed Dodd and Councilman Jim Hill voiced their opposition to fire staff. Gilliams was relying on a vote from vice-mayor Charles Mauti and Councilwoman Pamela Parris.

But during the special meetings last Thursday and Monday, Sebastian residents spoke out in opposition to fire city staff and asked the City Council to get back to business for the people. Even so, Gilliams still planned to push his proposals to fire the City Attorney and limit public input.

“We should never fire people without cause or because you don’t like them or what they stand for. And we should not limit public input to only residents. There are many business owners and property owners here,” Morris told the council.

Limiting public input was another proposal by Gilliams, which also lacked support from Mauti, Dodd, and Hill.

Judge Janet Croom also ordered the council to determine whether Gilliams’ request for a special meeting was improper.

After three meetings, Mayor Ed Dodd, Vice Mayor Charles Mauti, and Councilman Jim Hill all agreed that the city manager was within his rights to decline to schedule the special meeting.

“There was no violation of the city charter … Council Member Gilliams is raising issues to a law that he misinterprets,” Dodd told the council. “In reality, he should be saying that he’s not getting what he wants, so he is suing us to get what he wants.”

Gilliams said he plans to appeal the city council’s decision.

As for limiting public input to only city residents at the meetings, Dodd, Mauti, and Hill disagreed. They feel that business owners who don’t reside in Sebastian should have the same courtesy to speak as residents without any limitations.

“There is no way that I will try and stifle public input in any way or make it difficult for anyone who wants to bring business to the City of Sebastian,” Hill told the council.