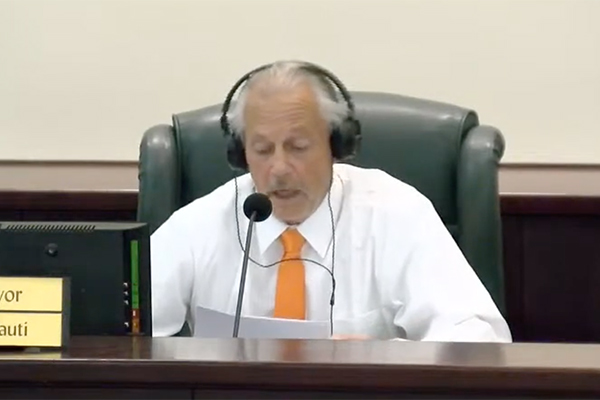 Sebastian Vice-Mayor Charles Mauti has asked for a special meeting to discuss the “Expenditure of Funds for Recall Election.” The meeting will take place Monday, August 31, 2020, starting at 5:00 p.m. There is also a budget meeting at 6:00 p.m., so the special meeting may be limited to one hour.

Sebastian citizens will argue that while Mauti may make a point of a possible $40,000 expenditure for the recall, he’s been costing the city more in lawsuits after the infamous April 22nd meeting.

The move comes after Charles Mauti, Damien Gilliams, and Pamela Parris may cost the city more than $1 million dollars in lawsuits from their April 22nd meeting, dubbed “illegal” by the State Attorney’s Office. Citizens called it an illegal coup to fire the city staff, appoint Gilliams as mayor, and take over the city. Gilliams and Parris were arrested in June for their criminal offenses, including perjury after lying to investigators.

Local residents will argue that the recall is necessary because of their behavior as council members, and citizens say this special election is not their fault.

We reached out to Tracey Cole, founder of the PAC that’s recalling Damien Gilliams, Pamela Parris, and Charles Mauti.

“My responsibility was to turn in the petitions as soon as they were ready. My promise was that I would deliver their voice and that’s what I did. If it’s paid by the city, then that’s the voter’s money and that’s what they wanted to do. They worked hard and want a special election. And that’s the people’s choice,” Cole told Sebastian Daily.

Many citizens also believe Mauti is trying to stop the recall with this special meeting, similar to Gilliams filing his lawsuits against the recall group, which legal experts say should be dismissed.

“If they would have resigned when asked, we wouldn’t be paying anything. And Charles Mauti could have saved us if he didn’t lie,” Cole added.