Better days are here in City of Sebastian 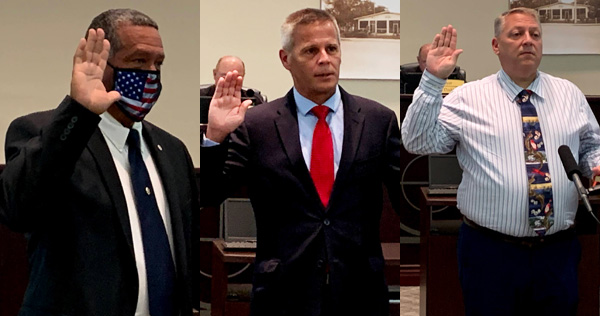 It was an entirely different City Council meeting Wednesday night than what we’ve seen during the past ten months. Three new people joined, and the city now has a new Vice Mayor.

The feeling in the room was pleasant without any signs of opposition or chaos. The meeting lasted about 1 hour and 10 minutes. It was a relief for many people to see a normal and cordial meeting.

“I just wanted to say congratulations to the new council … It’s going to be a pleasure working with you guys during the next year and I’m really proud of Sebastian in the way they came together … I’m urging the residents of Sebastian to continue this and to be heard and let’s be involved into keeping our beautiful city together,” Sherrie Matthews, who ran as a candidate during the recall election, told the Council.

Victor Silvestrini, who congratulated the new City Council members, said that he moved to Sebastian 10 years ago because he was impressed with the small town atmosphere and character. He reminded the Council that they work for the taxpayers of Sebastian and asked for no “backroom deals” or “distortion of the truth.” Silvestrini also has some concerns about the growth in Sebastian.

“It seems like Sebastian’s model for growth is the Palm Beaches. I would not be surprised if the next push year was for more monstrous high-rise condos, more large housing communities, trailer parks, shopping centers and anything else that can contribute to more congestion, more pollution, and higher taxes,” he told the Council.

On a side note, the city currently forbids high rises in or around Sebastian. It’s been a local ordinance for quite some time to preserve its small town character.

Former Council member Andrea Coy said Sebastian has strict height limits, which is why there are no high rises. Businesses are only allowed 25 feet if they’re on the riverfront, and 35 feet for the rest of the city.

“You’re tasked to keep it that way,” Coy told the Council.

“I’ve lived in this community for 36 years, and I have never once, not once, in 36 years, never heard us aspire to be Palm Beach County, or Palm Bay, Port St. Lucie, or any of those communities. I’ve seen nothing but the city do their best to control the growth. Control the atmosphere within our small town of Sebastian. So I find it a little ironic that people come here from just a few years ago and want to cast stones at how our government has controlled growth and controlled the taxes,” Morris told the Council.

Dave Newhart, who also ran for City Council during the recall election, said it was an honor for him to run for office in Sebastian with the other candidates. He congratulated McPartlan, Nunn, and Jones.

“I want to say that it was an honor for me to run with those three who are up there and all the other ones who ran for this office for City Council. I applaud you,” Newhart told the Council.

Under new business, the Council voted unanimously to approve the Fisherman Landing’s shoreline protection and parking improvements. The project’s cost is $562,000, which is being funded by other sources and grants for Sebastian.

The shoreline protection is a new wall along the waterfront for stabilization. The parking improvements are between Crab E Bills and the restroom area.

“It’s going to be exciting to see the parking area is taken care of and the shoreline restoration. It’s a wonderful project. From the beginning, the idea was to help revitalize the riverfront district,” Vice Mayor Hill said.

Hill added he’s very proud of his involvement in the project from the very beginning, transforming the area and saving something unique to Sebastian.

Mayor Ed Dodd also supports the project because of the impact it’s had on the riverfront. He said it’s also a good place to go and get a nice fish sandwich for lunch, where fish is fresh off the boats.

At the end of the meeting, the City Staff and Council members were upbeat, positive, and can’t wait to move forward with Sebastian’s new business.

When citizens didn’t like what they saw or witnessed with the former Council members, they took it upon themselves and began the recall. It was a long process, but one that replaced the people in office who they felt did not represent them or the City of Sebastian.

Citizens in other cities watched the recall unfold and know they can make a difference and recall their local government is they fail to represent them.

Letters to the Editor for Thursday, September 24, 2020