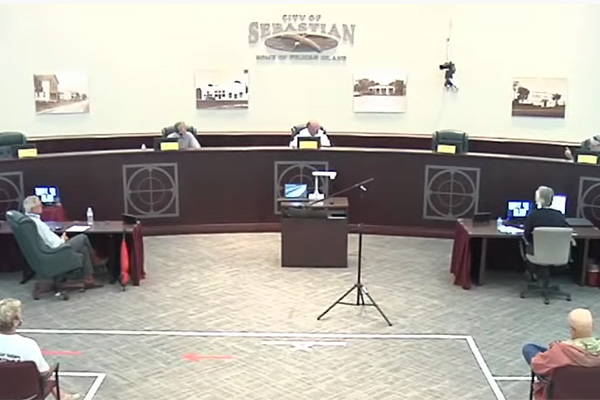 So far, ten candidates are running for Sebastian City Council to replace Damien Gilliams, Pamela Parris, and Charles Mauti during the recall.

Sebastian Daily is working on a forum, as well as interviews for citizens to get to know the candidates before the recall election. We will be asking direct questions on issues and policies, and how long they have lived in Sebastian.

The recall is scheduled for September 15, 2020, at Sebastian City Hall.

So far, we like all the candidates and believe better days are ahead for the city council.

Two former city council members, Albert Iovino and Bob McPartlan, are also running. The City may need some candidates who are already up to speed to get business done and to make important decisions on the annual budget that’s coming up. There are critical decisions ahead.

Listed below are the candidates:

Here’s a portion of their bios:

Albert Iovino says that due to corruption and inexperience, the time has come to elect experienced leadership, competence, and civility. With the end of the year budget quickly approaching, we need to have someone with the knowledge of how our council is run. Mayor Ed Dodd and Councilman Jim Hill need real support. Albrert has that knowledge and experience. He is ready and willing to get our City back to being the Sebastian we all know and love.

Bill Flynn has a lot of experience with city government and has helped field both labor and health care contracts as a CWA leader. He also does Federal and state bidding for equipment, as well as for the movie industry. Building a business from the ground floor has helped Bill develop problem-solving skills that would be useful to the City of Sebastian. He says he might not have all the answers, but is willing to research and listen to city employees. Bill believes this has been lacking with the current council for several months. Bill says people might not always agree on any subject, but he’s open to hearing opposing views. This is what Bill says is the most important part of leadership. He will work on keeping Sebastian the gem that we all know, love, and enjoy.

Bob McPartlan has a long career with the Florida Department of Children and Families. He was promoted to DCF Community Development Administrator for Circuit 19. In November 2011, Bob was elected to the Sebastian City Council and was re-elected in 2013, 2015, and 2017. He served as Mayor from 2012-2014 and 2015-2017. Bob serves on many boards throughout the Treasure Coast and Okeechobee. He has been selected as the Chair for the Indian River County Metropolitan Planning Organization for the last two years. In 2010, he was selected to serve on Sebastian’s Charter Review Committee. Bob has continued to advocate for domestic violence awareness as well as foster care, adoption, and the Guardian ad Litem program.

Chris Nunn is running on a platform of sensibility and the ability to have adult discussions and make good decisions based on Sebastian’s desires. He has been involved in Government as an employee for over 12 years. Chris has extensive knowledge and understanding of the government bid and contract process. He also has extensive knowledge of the Florida Sunshine Law. Chris has been heavily involved in local charities and Boy Scouts of America and 4H. Chris believes in accountability and transparency in Government, and strongly in listening to citizens. Chris believes in making sure citizens have correct and honest information. He says drama has no place in our City Council, and we need to work together in the Sunshine to do what’s right for our beautiful City.

Dave Newhart is running for City Council because he believes Sebastian needs to return to a working, civil, and productive council to serve its citizens. He believes there are many issues ahead that need people who can work collaboratively to meet this great City’s needs and future. Dave is a director at the Veterans Council of Indian River County and a retired Episcopal Priest. Dave believes in bringing Sebastian back to a City Council that works collaboratively, with civility, with no personal agendas, and with integrity.

Fred Jones has served our country in the US Marines and the state for more than 30 years as a Florida State Trooper. He spent his entire career on the Treasure Coast. Fred served as a board member of the Substance Awareness Center of IRC for 12 years and was formerly the Chair of its Board. Fred also served as the Chair of the Charter Review Committee for the City of Sebastian and past chairman of the youth activities committee for the Sebastian Elks Lodge. He promises to work diligently with City Staff and other council members to keep Sebastian beautiful.

Louise Kautenburg has been very active with the Planning & Zoning board in Sebastian for several years. Louise is also a real estate professional with Re/Max. She was involved with Sebastian Citizens Speak Out and is extremely knowledgeable about City matters and issues, and has a lot of experience to bring to the City Council.

Michael Frank truly loves Sebastian and has built his entire life around this special place we call home. He promises to work hard to keep it that way. Michael says it’s been painful to watch the city council meeting during the past few months because of the needless dysfunction and economic cost created by three dishonest incompetent(s). Sebastian means everything to him and his family and looks forward to speaking with people. Michael says there are some sobering economic realities that the City will face later this year and into 2021.

Sherrie Matthews says Sebastian needs professional leadership to bring about positive change. She wants to bring this leadership to the City. Sherrie has spent over 35 years working in Government. During her career, she held various leadership roles that qualify her for City
Council service. Sherrie worked in the County’s Corrections Division where she created and developed;ped an inmate vocational program of printing and design that taught female inmates job responsibility and skills. Sherrie served as a team leader assessor for the Florida Accreditation Commission and was awarded Team Leader of the Year for the State of Florida. She has received many awards throughout her career. Sherrie promises to work tirelessly in serving the citizens in Sebastian.

Victor Young is running on a platform supporting the Sebastian citizens in the goal of keeping our lovely City a paradise. He promises to listen to the citizens and make well-informed decisions. Victor has been in many leadership roles, and he knows how to make difficult decisions. He has been involved in many local outreaches through his church or other organizations. Victor has been here for most of his life.