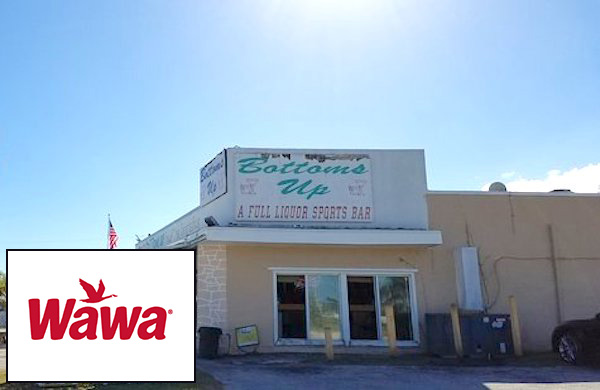 Rosie's Bottoms Up in Micco.

SEBASTIAN – Several people have contacted us about a rumor that Wawa, Inc. purchased Rosie’s Bottoms Up in Micco, just north of Sebastian.

We usually don’t report on rumors, but this one is spreading like wildfire, and we wanted to know. I would love to have a Wawa near Sebastian! Who wouldn’t?

There is now a large sign in front of Bottoms Up that reads “LAND FOR SALE.” So, I contacted Wawa and Rosie’s Bottoms Up. They both replied the same day.

“Not true. Property is on the market though,” a spokesperson from Rosie’s Bottoms Up told Sebastian Daily.

A Wawa spokesperson told me that the company has no plans to build or open in Micco or Sebastian at this time.

Wawa is known for their built-to-order foods, beverages, coffee, fuel services, and surcharge-free ATMs. It’s a chain of more than 750 convenience retail stores (over 500 offering gasoline).

The company recently expanded by opening a Wawa in Vero Beach in 2016. That store is always busy.

It’s only a matter of time before Wawa breaks ground in Sebastian or Micco. Land along U.S. Highway 1 is for sale everywhere, and this town is growing.

Wawa could build a new store in South Brevard or Sebastian without making it known because of competitors. I’m not suggesting that they are, but they do a good job keeping things quiet until the land is purchased.

Many chains will buy land through a different company until they’re ready to make a public announcement. Walt Disney used this strategy to keep land prices low in Orlando. Ray Croc created a real estate company just to buy land for McDonald’s.

I’m sure the six grouches in Sebastian are yelling: “Stop building!” But I wonder if they ever had a Wawa pretzel, one of their delicious coffees, or one of their made-to-order sandwiches?