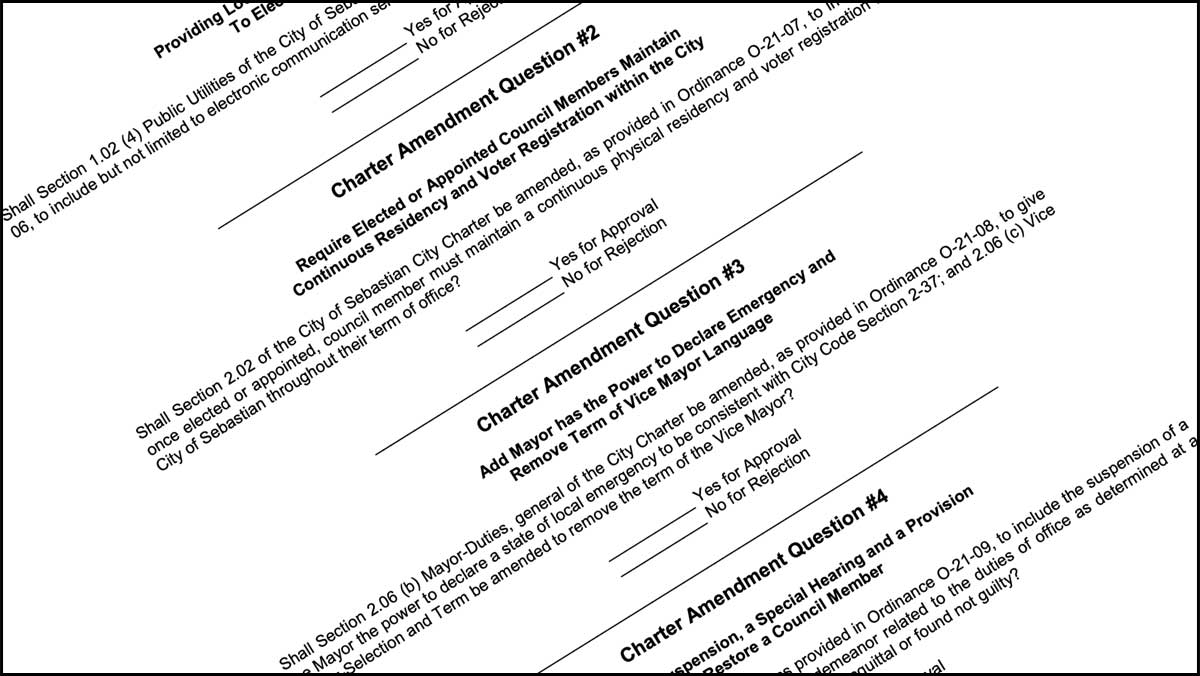 The Sebastian Charter Review Committee spent months working on changes that are part of a review process every five years.

Some of the proposed changes came up after the political chaos that former City Councilman Damien Giliams and Pamela Parris put the City through before they were recalled.

For some citizens, the referendum questions on the ballot were a bit confusing, so we’ll try our best to explain each one. These proposals are very important for Sebastian to prevent further issues down the road.

Providing Local Public Services to Include But Not Limited To Electronic Communication Services.

Shall Section 1.02 (4) Public Utilities of the City of Sebastian City Charter be amended, as provided in Ordinance O-21- 06, to include but not limited to electronic communication services as a possible public utility?

Explanation: The amendment would make it a requirement for City Council members to live and vote during the duration of their entire term within the City of Sebastian.

Add Mayor has the Power to Declare Emergency and Remove Term of Vice Mayor Language.

Shall Section 2.06 (b) Mayor-Duties, general of the City Charter be amended, as provided in Ordinance O-21-08, to give the Mayor the power to declare a state of local emergency to be consistent with City Code Section 2-37; and 2.06 (c) Vice Mayor-Selection and Term be amended to remove the term of the Vice Mayor?

Explanation: Whether or not the Mayor has the ability to declare a State of Emergency. Our city rarely makes a declaration unless there’s a major hurricane heading towards Sebastian. The only other time was during the COVID-19 pandemic. As for the Vice-Mayor, this would outline the actual term to serve for one year (same as the Mayor).

Provide for Suspension, a Special Hearing and a Provision to Restore a Council Member.

Shall Sections 2.08 (a), (c), (d) (e) and (f) be amended, as provided in Ordinance O-21-09, to include the suspension of a council member if he or she is arrested for a felony or misdemeanor related to the duties of office as determined at a special hearing and to revoke and restore the suspension upon acquittal or found not guilty?

Explanation: Many citizens were wondering why this wasn’t already in the Charter after both Damien Gilliams and Pamela Parris were arrested for their crimes while serving in public office. People were outraged that nothing could be done to suspend them after breaking laws related to their duties of office.

Limit Special Meeting to One (1) Topic and Require Reasonable Notice.

Shall Section 2.12 Procedure (a) Meetings of the City Charter be amended, as provided in Ordinance O-21-10 to require a special city council meeting to be limited to one topic and require reasonable notice.

Explanation: Last year, Damien Gilliams held several special city council meetings that some say did not have reasonable notice. The amendment addresses that and keeps the special meeting limited to one topic.

Adjust Days for Candidates to Qualify for Election.

Shall Section 4.02 (b) of the City Charter be amended, as provided in Ordinance O-21-11 to adjust the days a candidate has to qualify for election to at least 81 days but no more than 96 days prior to the day of the election?

Outcome for a Tie Vote Shall be in Accordance with Florida Law.

Shall Section 4.12 (b) of the City Charter be amended, as provided in Ordinance O-21-12 to include the language that the outcome of a tie vote shall be in accordance with Florida Law instead of a special runoff election.

Explanation: It handles tie votes in elections in accordance with state law. There would be a drawing for any exact ties as a runoff election can get quite expensive.

What to Do When There is Not a Majority of City Council Available to Serve.

Shall Section 4.14 of the City Charter be amended, as provided in Ordinance O-21-13 to clarify the language what to do when there is not a majority of City Council available to serve and to add the language for the removal or suspension from office as additional reasons Council Member would not be able to serve?

Explanation: It would be how to establish an interim government if a majority of the City Council is unable to perform their duties. It clarifies the language of the “why” and “how” to form an interim council.