Tropical storms Paulette and Rene, plus four disturbances amid peak of hurricane season 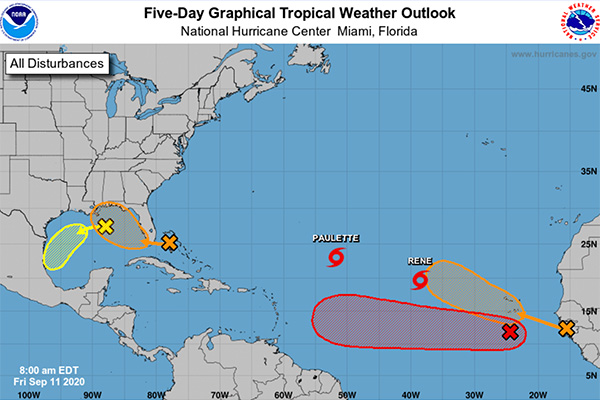 Welcome to the peak of the 2020 Atlantic Hurricane Season! Tropical storms Paulette and Rene are out there, plus four other disturbances from the Gulf of Mexico to the Atlantic.

The first disturbance will cross the Bahamas and Florida today and tonight and eventually move into the Gulf of Mexico on Saturday. Forecasters say the disturbance could form into a tropical storm by next week.

“Upper-level winds are expected to become conducive for development, and a tropical depression could form while this system moves slowly west-northwestward over the eastern Gulf of Mexico this weekend and early next week. Regardless of development, this system is expected to produce locally heavy rainfall over portions of the Bahamas, South Florida, and the Florida Keys during the next couple of days,” the National Hurricane Center (NHC) said in a statement.

The second disturbance is located over the north-central Gulf of Mexico. This system is producing thunderstorm activity and is currently minimal.

The third disturbance is a tropical wave located a few hundred miles south of the Cabo Verde Islands; it shows some concerns as it moves towards the Caribbean Sea next week.

“A tropical depression is expected to form within the next few days while the system moves generally westward at 15 to 20 mph across the eastern and central tropical Atlantic,” The NHC said.

The fourth system is near the coast of Africa and is expected to turn north. No threat to land.

Tropical Storms Paulette and Rene are no threat to us and are expected to turn north and out into the sea.

Sebastian couple thanks residents for being kind after house fire

Sebastian couple thanks residents for being kind after house fire