Tropical storm to become a hurricane after passing Florida 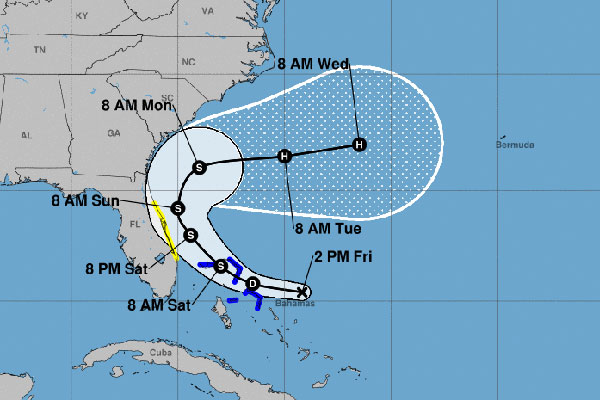 Tropical storm to become a hurricane on Tuesday.

A tropical storm will form Saturday in the Atlantic, and it is expected to bring thunderstorms and strong winds this weekend in Sebastian, Florida.

The disturbance, called Tropical Cyclone Nine, will become a hurricane in the Atlantic by Tuesday morning after it passes Florida. Right now, we do not expect a hurricane in Sebastian or Florida or the Bahamas.

The tracking shifted slightly east, taking Sebastian out of the cone of uncertainty. However, we can still expect winds of 30 to 40 mph, rain, and potential flash flooding from this storm.

“The system could bring tropical-storm-force winds to portions of the Florida east coast over the weekend,” the National Hurricane Center said.

The seas near the Sebastian Inlet are rough today, with white caps extending into the river and lagoon.

Since last night, most of the computer-generated models show the storm moving northward along the east coast of Florida.

There are no hurricane threats to Sebastian at this time.

We will publish another update later tonight.

Sebastian Live Entertainment and Things To Do

Sebastian Live Entertainment and Things To Do