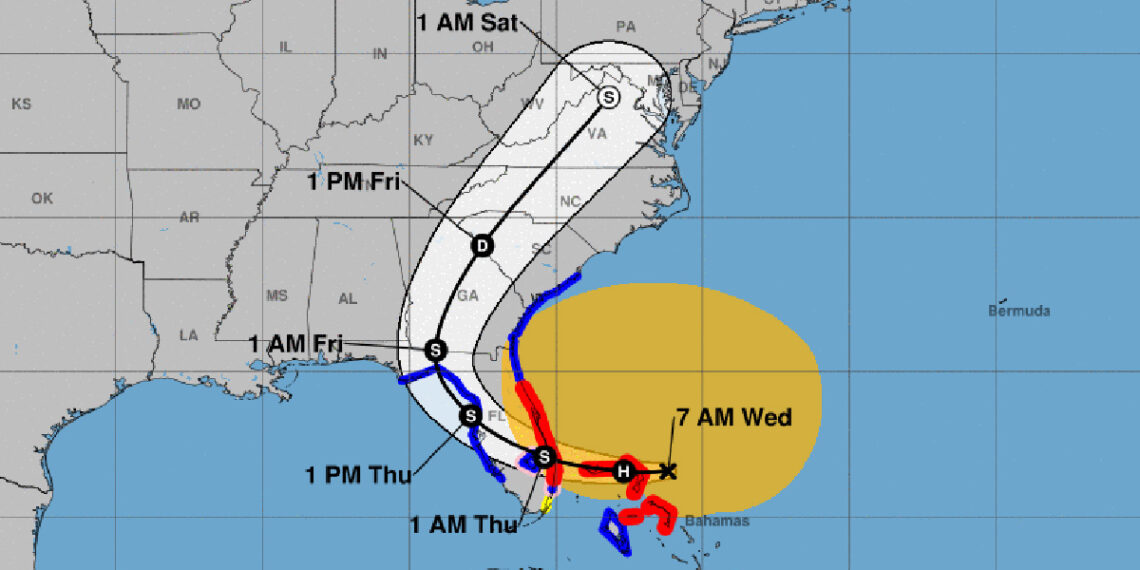 Tropical Storm Nicole will become a hurricane later today as it moves closer to Florida. The National Hurricane Center (NHC) said only some strengthening is expected, and it could remain a Category 1 hurricane. Landfall is expected late tonight and into the early morning hours on Thursday.

“Only slight additional strengthening is anticipated, and Nicole could still become a hurricane later today while it moves across the northwestern Bahamas and reaches the east coast of Florida,” NHC said.

Sebastian, Vero Beach, Fellsmere, Micco, and Palm Bay are in Nicole’s path as of 8:00 a.m. The track stretches from Palm Bay to Delray Beach.

“Track model guidance indicates that Nicole should turn westward soon, and its center is forecast to move across the Abacos and Grand Bahama Island later today and approach the southeast or east-central coast of Florida tonight,” NHC said.

Forecasters say Nicole has picked up movement speed from 9 mph to 13 mph during the past 24 hours, indicating that the storm will move through our area quickly.

The Indian River County landfill and Roseland Convenience Center will be closed Wednesday and Thursday.

Sebastian City Manager Paul Carlisle is urging residents to take time to pick up any loose debris in their yards today that high winds could pick up.

Nicole is expected to become a Category 1 hurricane, but the National Hurricane Center says there’s a probability it will weaken back to a tropical storm before landfall.

Residents in Indian River County, especially near the waterfront, should take this storm seriously due to the potential storm surge.

Due to its large size, Nicole will likely cause significant wind, storm surge, and rainfall in Florida.

Sebastian Daily will continue to update you when more information is available.