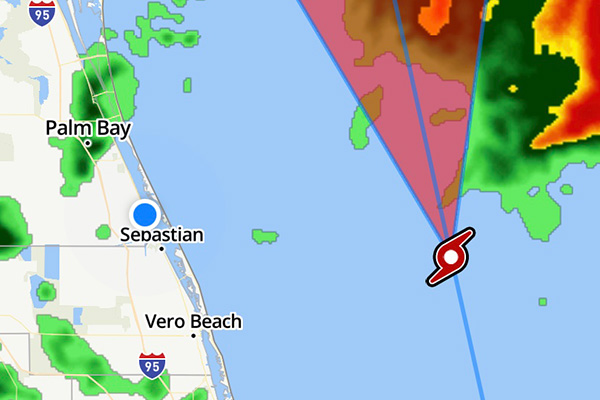 Tropical Storm Isaias is now beginning to move past Sebastian while picking up speed to 9 mph with maximum sustained winds of 70 mph.

The most dangerous part of the storm has remained offshore. Sebastian is now experiencing an increase in winds as it continues to travel in a northwest direction.

The winds will continue through tonight in Sebastian. It’s important to stay indoors until Isaias passes.

“The latest model guidance remains in excellent agreement on Isaias moving north-northwestward through a break in the subtropical ridge tonight and turning northward by Monday morning, all the while remaining offshore of the coast from east-central Florida to Georgia,” the National Hurricane Center said.

Tropical Storm Isaias will continue to bring higher winds during the next few hours. It’s also surprising that we didn’t get all the rain that was in the forecast.

The roads in Sebastian have a few tree limbs down, and so far, we haven’t seen any structural damage to any buildings caused by the storm.

We got lucky with this storm as many forecasters thought it would be a Category 2 hurricane by the time it arrived in Sebastian.

It’s always better to prepare for storms because we’ve seen how they can change or pick up strength in a matter of hours.

In 2004, everyone took down their shutters and boards after Hurricane Frances went through Sebastian. But then hours later, we found out that Hurricane Jeanne was making a full turn and coming right back to Sebastian. The town boarded back up, and Jeanne left Sebastian devastated for weeks. That was the beginning of our Hurricane reports.

Thankfully, we don’t have that kind of storm today.

Sebastian Daily will continue to update you on Isaias. Stay safe!