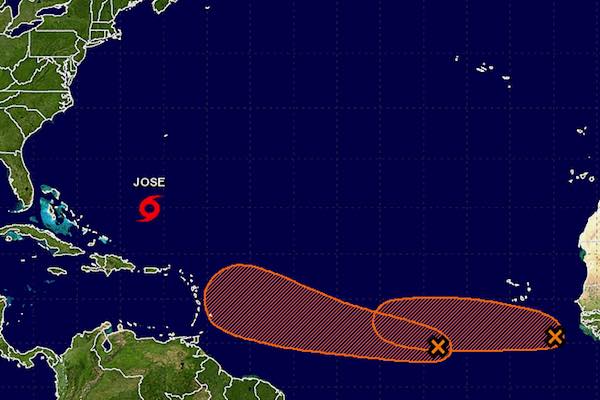 There's only a slight chance of further development of two tropical waves in the Atlantic Ocean. (Photo: NOAA)

SEBASTIAN – Indian River County and trackers are monitoring two tropical disturbances off the coast of Africa.

At this time, there is no threat of these storms hitting Sebastian and Vero Beach. These are just minor disturbances in the Atlantic.

These tropical disturbances happen all the time, and most of them are broken up before they become a post-tropical cyclone or depression.

We want people to be aware, not scared.

People have caused a panic for some in Sebastian, Fellsmere, and Vero Beach on social media with rumors that two hurricanes are brewing right now in the Atlantic. That’s far from the truth.

We are in a very active hurricane season for the Atlantic, and we’ll probably keep getting these tropical disturbances and waves until November.

If a hurricane does come, you should already have plenty of water, batteries, and can goods that you purchased before Irma. Please don’t empty the store shelves because of these two disturbances.

Here are the facts about the first disturbance.

“A tropical depression could form early next week while it moves westward at around 15 mph across the tropical Atlantic,” the National Hurricane Center said. There’s only a 60 percent chance of further development during the next five days.

The second tropical wave is producing a large area of disorganized shower and thunderstorm activity.

“Some development of this system is possible over the next few days before upper-level winds become less favorable. The system is forecast to move westward at 10 to 15 mph across the far eastern tropical Atlantic for the next several days,” NOAA stated. There’s only a 40 percent chance of further development during the next five days.

We recommend that everyone just relax and enjoy their lives. There’s no need to prepare for storm activity at this time.

Always remember that not every tropical wave in the Atlantic is going to be a hurricane.