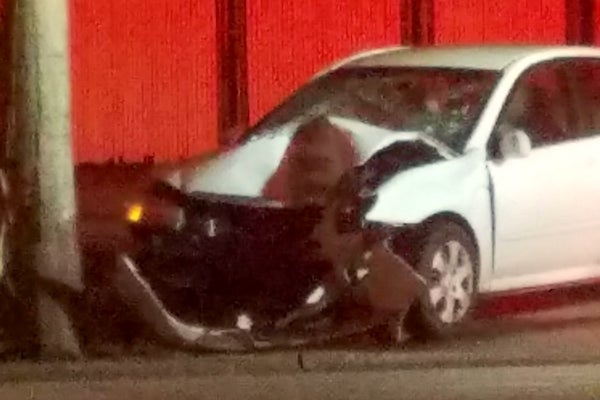 A Vero Beach woman died Thursday in a car crash near the Dunkin' Donuts in Sebastian. Photo by Shannon McClain.

SEBASTIAN – On Thursday night at approximately 5:57 p.m., law enforcement officials received several 911 calls in reference to a single vehicle crash in the 700 block of US Highway 1 near the Dunkin’ Donuts, according to the Sebastian Police Department.

“When officers arrived on scene they found a white female lying on the ground near the vehicle and the vehicle was on fire,” Police Commander John Blackledge told Sebastian Daily.

The female was identified by her Florida Driver’s License as 31-year-old Kaitlyn M. Regan from Vero Beach, Florida. Her next of kin was notified of the crash at approximately 7:00 p.m. and they responded to Sebastian Hospital where officers met them and explained to them what happened.

At this time it is still unknown what caused the crash.

A citizen arrived at the scene after the crash happened and pulled the female out of the vehicle as the vehicle’s engine caught fire.

Traffic homicide investigators responded to the scene and began their investigation. The vehicle was eventually towed to the Sebastian Police Department Evidence Compound.

More information will be released about the accident on Tuesday.