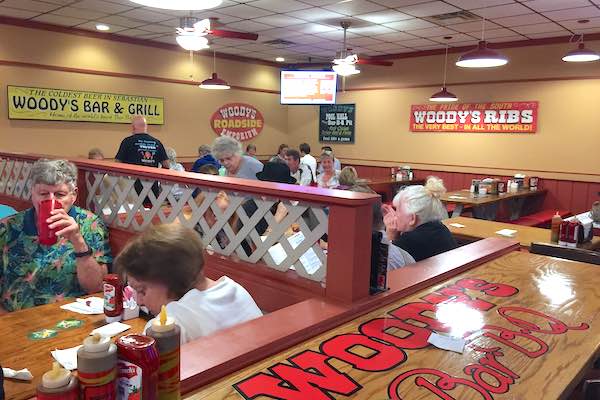 SEBASTIAN – Woody’s BBQ in Sebastian offers trivia on Monday and Tuesday nights starting at 6:30 p.m. They are the home of the longest-running trivia in our area, just shy of four years.

We arrived on Tuesday at 5:30 p.m. to have dinner with some friends before the trivia began. Woody’s always has a great atmosphere with friendly people.

Trivia begins promptly at 6:30 p.m. in the back area of the restaurant, behind the full-service bar. Make sure that you call ahead to reserve a table as they fill up fast.

There are several tables and booths with plenty of large-screen televisions to display the questions. You can have up to six people in your team. The team names are very creative, and participants have a lot of fun with them. For example, one team was the Sebastards, and another was Team Dementia.

There are five rounds with ten questions each. Tiebreakers are done by rolling dice. It’s about two hours (6:30 p.m. – 8:30 p.m.), and they stay on schedule. Each round is based on a category of ten questions. Some of them are harder than others. Some of the categories included Sports, Movies, Physics, etc.

At around 6:00 p.m., the rules of Woody’s BBQ Trivia are posted on the televisions:

They are very strict about mobile phones, as they don’t want people using their phones to look up the answers on the Internet. If your phone rings, you are automatically disqualified. Make sure you have your phone turned off or at least switch it to Airplane Mode. However, you are allowed to use your phones when half time is called, which is after the third round after all the sheets are collected. Then, everyone gets a 15-minute break.

Woody’s BBQ Trivia has great prizes for winners. They are as follows:

We brought about 18 people and divided them into groups. Everyone enjoyed themselves and will be coming back soon.

Also, you can celebrate your birthday at Woody’s by getting a free meal of up to $12.

Letter to the Editor: Democracy Up in Smoke

Letter to the Editor: Democracy Up in Smoke