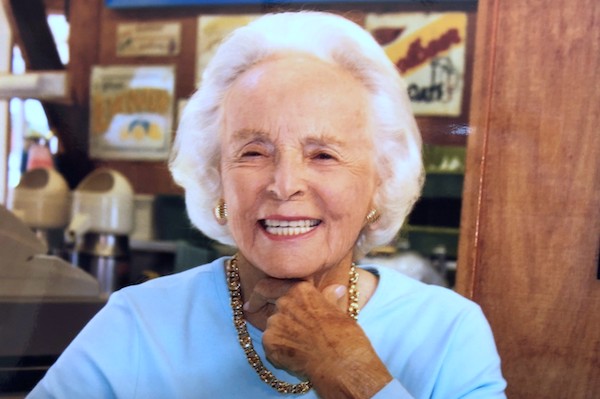 VERO BEACH – – Mrs. John Dabney Penick of Watch Hill, RI, passed away on March 6, 2019 at 19 Massachaug Road. She was accompanied by her grandsons, Matthew and DJ Penick, and longtime caregiver, Pearl Malburn, at the time of her passing.

Eileen Clements Penick’s only surviving child, Dabney Penick Pierce, and granddaughter, Clemmie Pierce Martin, visited with her the morning of March 6th. Mrs. Penick was born in Glen Cove, Long Island,on March 15, 1922, and was the daughter of Henry Herbert and Eileen Rose Clements. She was the loving wife of the late John Dabney Penick, who predeceased her in 1973.

Eileen witnessed countless monumental events over the course of her nearly 97 years. In her free moments, she enjoyed playing tennis and golf for many decades, and particularly relished her 2009 (at the age of 87) hole-in-one on the John’s Island (Vero Beach) Golf Course.

More than anything, though, Eileen served as the matriarch of a large, close-knit family. Eileen spent every summer for half a century in Watch Hill, RI, where she was known, esteemed, and occasionally feared (!) by family and friends alike. Generations of children and grandchildren considered “Mimi” and “Mrs. Penick” as an unforgettable part of their childhoods. One wouldn’t find a person in all of Watch Hill who doesn’t have a story about Mimi!

Those surrounding her in her astounding 96 years of life would agree that she was, to all around her, larger than life. Her quick-witted humor aside, you never questioned that she would do anything for her family and loved ones, and loved each of them endlessly. Her children and grandchildren were the light of her life, and each would attest that she, too, was the light of theirs. She was cherished by all and will be deeply missed.

Funeral services will be held privately by the family. Burial will be held at Mt. Hebron Cemetery in Montclair, N.J., and will be situated next to her husband, John Dabney Penick.

The family asks that in lieu of flowers, donations be made to the MD Anderson Cancer Center.