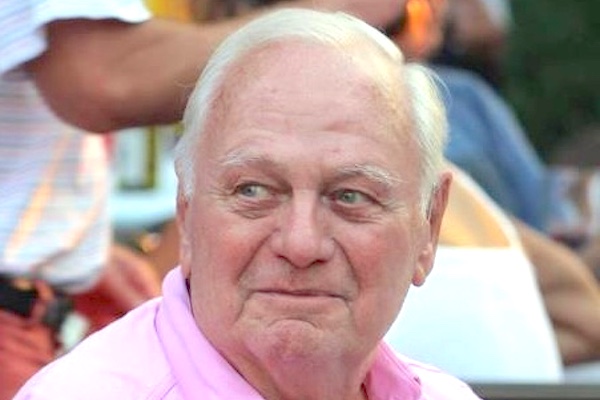 Mr. Bellis was born in 1923 in Oradell, NJ on his family’s farm, surrounded by his extended relatives from the Blauvelt and Demarest families. He attended Kingswood School in Hartford, CT. and graduated from Wesleyan University in 1944 where he played soccer and was on the diving team. Some of his most fond memories were at Wesleyan as President of the University’s Delta Kappa Epsilon fraternity.

Mr. Bellis began his career in the paper industry with Union Camp Corporation and relocated to Chicago, where he met the belle of the ball, Blair Butler of Winnetka, Illinois. Married in Winnetka, the newlyweds moved east to settle in New Vernon, New Jersey to raise their family. He served as President of the Harding Township Civic Assoc. and also as a stalwart chairman of the Board of Adjustment. Jim was a founding member of the Mendham Valley Gun Club, and a dedicated supporter of the Purnell School, Pottersville, New Jersey.

Mr. Bellis enjoyed a 30-year career as an executive in the corrugated paper industry, retiring in 1975 as Vice President of Great Northern Nekoosa Corporation which ultimately became Georgia-Pacific. Upon retirement, Mr. Bellis became chairman of the Blauvelt Demarest Foundation and the Hiram Blauvelt Wildlife Art Museum. Due to Mr. Bellis’s continued commitment, the Hiram Blauvelt Wildlife Art Museum is to this day one of the premier museums in the country of its genre. In further pursuit of his passion of Bergen County Dutch architecture and history, Mr. Bellis also served as a founding commissioner of the Historic New Bridge Landing Park Commission.

Mr. Bellis was predeceased by his daughter, Courtney (Coco) Bellis Ireland, and is survived by his wife of 66 years, Blair Butler Bellis; his son, James L. Bellis, jr., and his wife Patricia, of Bedminster, NJ; his daughter Blair (Tinker) Judson, and her husband Gilbert, of Grand Rapids, MI; his daughter Martha Gregg, and her husband James, of San Francisco, CA; his beloved seven grandchildren who knew him as “GrandSir.”

He will be most remembered by his family loving the New Jersey farmland atop his tractor or with a rake or tool in his hands.

A private family interment and reception will be held at a later date.