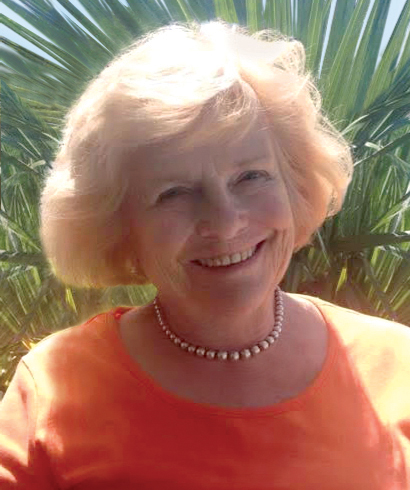 Elizabeth Ann Ewing Fox (Bette) died at home in Greenwich, CT, on Sunday, August 30, 2020, of heart failure. Born in Rutland, VT, March 26, 1931, she was the eldest daughter of Walter C. and Ruth T. Ewing of Chippenhook, VT. She was of the tenth generation of Ewings to live there. First attending the one-room schoolhouse in Chippenhook, she was graduated from Rutland High School in 1948 and Castleton University in 1950, both with honors. On July 16, 1949, Bette married her husband of 66 years, Wayne C. Fox, of Rutland, VT.

Bette began her 52-year teaching career in that same one-room school in Chippenhook, where she taught all grades, first through eighth. In addition to teaching, Bette tended to all the school’s needs, which included the building’s upkeep, acting as school nurse and chopping wood for the stove during the winter months. She later taught third and fourth grades in Middletown Springs, VT.

Bette and Wayne refurbished a house in Chippenhook, and this is where they lived during the early years of raising their children, Elizabeth and Ewing. In 1957, Wayne was transferred to Massachusetts to work for Tampax in Palmer. Bette taught seventh and eighth grades in Belchertown, MA, and third grade in Thorndike, MA. She was the Secretary of The Rosary Sodality at Saint Thomas Church and began her decades-long involvement in the Teachers Union, serving in MA, NH and NY as an officer and contract negotiator. In all three states, she was also active in the League of Women Voters.

In 1964, the family moved to Claremont, NH. Bette was graduated from Keene State College with honors in 1967, earning a BS in Mathematics and English. She attended Dartmouth College to pursue her Master’s in Humanities. During her time there, she also learned computer programming. This became a lifelong passion for her, as she delighted in the innovations that technology offered the field of education. In Claremont, Bette taught the fifth grade at The Bluff School and seventh and eighth grade math at Claremont Junior High School in addition to serving as a Cub Scouts Den Mother. When New Hampshire sought to formulate a statewide code of professional conduct and ethics, she was selected and served as the representative for educators throughout the state at the state capitol. She was also selected as the state representative to the Western Hemisphere Math Conference in Canada.

In 1974, Wayne was transferred to Willsboro, NY, to serve as Plant Manager for the new Tampax. They bought an 1860 Carpenter’s Revival house called Kimberlea in Westport, NY, and spent that summer transforming the home into a year-round residence. Bette joined the faculty at Ticonderoga Central School, teaching sixth, seventh and eighth grade math, reading and computer science, retiring after 26 years there. Additionally, Bette served on the prestigious Middle States Assessment Commission on Elementary and Secondary Schools.

Encouraged by her father, Bette developed a deep interest in Ewing family genealogical research at the age of ten. This became a lifelong pursuit, as she traveled around the country to gather information from libraries, town halls and cemeteries and spent most days in her retirement doing research and contributing her notes to the genealogical record. She is published in The Ewing Family Association Journal (Clan Ewing of America). Bette was a member of the Ewing Family Clan and Daughters of the Magna Carta. Her love of the outdoors complimented her favorite activities of gardening; botany: studying, gathering and preserving her finds; bird watching; camping; and spending time at the beach. Together with her husband, antiquing was also a favorite pastime. When asked which of life’s experiences were most profound, she described traveling with Wayne; educational trips with her children and grandchildren; and attending a Mass said by Pope John Paul at the Vatican. Retirement travels led Bette and Wayne to Sebastian, FL, where they lived in the winter.

Bette will be remembered for her strong convictions regarding equality for all, and in particular, the advancement of women. Bette will also be remembered as fiercely loyal to those she loved; energetic; always up for an adventure; reading math textbooks for fun; doing research or working in her gardens; and always wearing bright colors and her genuine smile. She was fierce and brave and a woman of incomparable grace. She was an indefatigably devoted wife, mother, grandmother, and friend. To be loved by her meant to be guided by her generous offer of support and wisdom. She exemplified a life devoted to the pursuit of knowledge and love, and her legacy will live on through three generations, friends she held dear and those she taught.

Bette was predeceased in July 2010 by her son, Ewing Walter Fox, and in February 2015 by her husband, Wayne Charles Fox. She is survived by her daughter, Elizabeth Ann Fox, of Greenwich, Connecticut; and by five grandchildren and seven great grandchildren: Ewing Fox and wife Theresa and their two daughters, Logan and Etta; Elizabeth Barker and husband Ford and their two children, Fox and Henrietta; Crosby Fox and husband Kent Collier and their two sons, Sullivan and Arlo; William Dyke and fiancée Kathleen Godbold; and Emily Fox and husband Brendan McLaughlin and their son, Madds. She is also survived by her beloved
younger sisters, Beverley Ewing Taranovich of Concord, NH, and Joyce Ewing McGinnis of Rutland, VT, and two nieces and five nephews.

For those who wish, donations in her memory may be made to the Ballard Park Foundation in Westport, NY (www.ballardparkny.org), or to the League of Women Voters (www.lwv.org).

The family plans a memorial service and reception in Westport, NY, in the summer of 2021 or when it is safe to gather. Details will be released when finalized.

When will Sebastian see warmer temperatures?