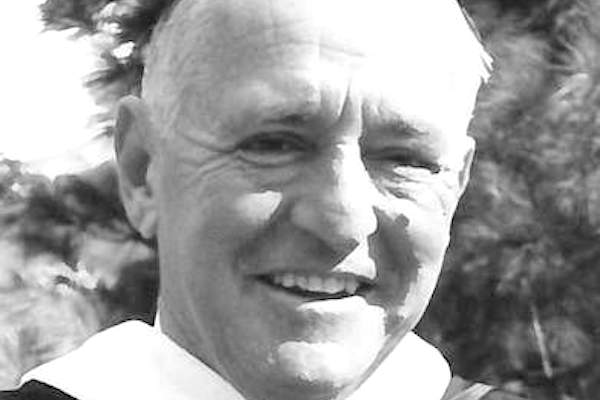 He was born on September 23, 1925, in Plainfield, N.J., to Delano Wood and Caroline Heminway Ladd. He was predeceased by his beloved wife of 64 years, Mariette (Sis) Walker Ladd, his beautiful grand-daughter, Emily Prescott Rogers, and his sister, Caroline Ladd McCullagh.

Del met his wife, Sis, in Madison, Ct. where they summered for many years. They both enjoyed tennis and were avid sailors, sailing on the Long Island Sound as well as cruising up and down the New England Coast on his boat, the “Aladdin”. They spent many happy years in Rye NY, where they raised their family of six children, and later in Greenwich Ct., before retiring to Vero Beach.

After attending elementary school in Plainfield, N.J. , Del graduated from the Taft School (Head Moni-tor), the Merchant Marine Academy, and Yale University. During WWII, he served as an ensign in the Merchant Marine, and as a Lieutenant J.G. in the US Naval Reserve. Upon graduation from Yale after the war, he began a successful business career at Owens-Corning Fiberglass where he rose to Vice President and then became Chairman and CEO of Edwin Bird Wilson, a marketing and advertising firm in New York City. He also participated in numerous industry and educational organizations, serving as Treasurer of the American Advertising Association, and on the Board of Trustees of the Taft School, Rye Country Day School, the Madeira School, the Westminster School, and the Oldfields School.

Del was an accomplished athlete, playing collegiate basketball and baseball. In addition to sailing, he was an avid “rackets” sportsman, playing squash, tennis and paddle tennis throughout much of his life. He competed successfully in numerous club sailing races and tennis tournaments, particularly in Madison, where his name often appears on the Club’s walls as a tournament winner. He was a fierce competitor and took great pleasure in being undefeated against his children in tennis.

Del believed passionately in the importance of commitment, leadership and setting an example by one’s actions. He was steadfastly devoted to his family and his friends. He strongly believed in helping others, particularly young adults starting out in professional life. He will be sorely missed by all who knew him and many whose lives he touched.

Memorial services will be held at Christ’s Church in Rye, N.Y. on Saturday, November 17th, at 11 am and at The Community Church of Vero Beach in Vero Beach, Fl. on January 10, at 1:00 pm.

In lieu of flowers, donations may be given in Delano Ladd’s name to The Taft School, for the “Civics Initiative” curriculum, 110 Woodbury Road, Watertown, Ct. 06795.