“The Fantasticks” Musical Opens At Theatre Guild in Vero Beach 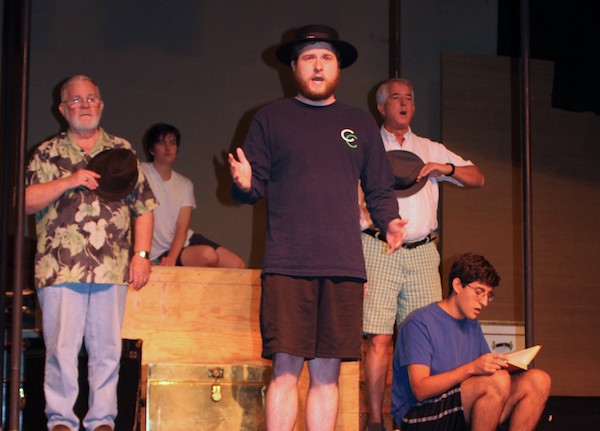 The Fantasticks comes to the Vero Beach Theatre Guild.

VERO BEACH – “The Fantasticks” by Harvey Schmidt with lyrics by Tom Jones, opens Thursday, May 10 at the Vero Beach Theatre Guild and will continue to run through May 20.

The 1960 show’s original Off-Broadway production ran a total of 42 years and 17,162 performances, making it the world’s longest-running musical. The renowned musical score includes songs such as “Try to Remember,” “Soon It’s Gonna Rain” and “Much More.” Many productions have followed including television and film versions and today the show is still produced around 250 times a year.

The simple love story tells an allegorical story loosely based on the play The Romancers (Les Romanesques) by Edmond Rostand, concerning two neighboring fathers played by Landis Stansfield and Paul Grubbs, who trick their children, Luisa played Katlin Ruby and Matt played by Alexander Martinez, into falling in love by pretending to feud.

The fathers hire traveling actors played by Bill Floyd and Aiden McDonnell, along with Theo Blumstein as El Gallo, the narrator, to stage a mock abduction, so that Matt can heroically seem to save Luisa, ending the feigned feud.

When the children discover the deception, they reject the arranged love match and separate. Each then gains disillusioning experiences of the real world, seen in parallel fantasy sequences. They return to each other bruised but enlightened, and they renew their vows with more maturity.

The musical is under the direction of Clara McCarthy. Clara has won acting and directing awards for her work with Barn Theatre, The Lyric, Pineapple Playhouse and Vero Beach Theatre Guild. Musical direction is by Monica Lewin and Lisa Keeler is managing set designs by Michael Naffziger. Marlys Kauten is in charge of costuming with Ann McCabe on props.

Tickets for “The Fantasticks” can be reserved by phoning the box office Mondays through Fridays from 10 am to 2 pm or online at verobeachtheatreguild.com.