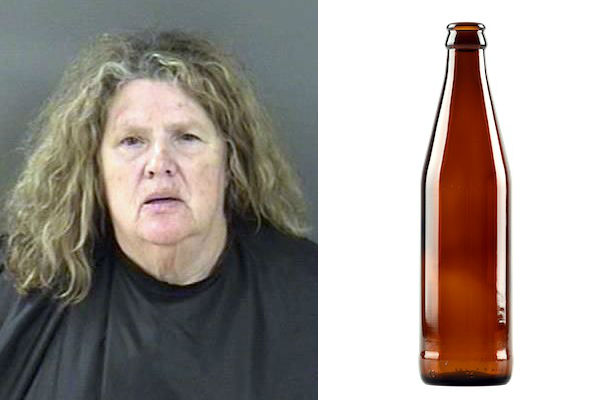 VERO BEACH – A 68-year-old woman was arrested after she hit her boyfriend over the head with a beer bottle for not eating dinner, according to the Indian River County Sheriff’s Office.

Barbara Jean Starkel was charged with Felony Aggravated Battery at her home in the 3000 block of Mariners Way in Vero Beach.

Deputies arrived and found Starkel still holding a beer bottle in her hand. She claimed that her boyfriend attempted to attack her, so she needed to defend herself and hit him with a beer bottle, the report said.

Inside the home, the boyfriend was laying down no a couch in the living room with a blood-soaked pillow and towel, according to the report.

“[The boyfriend’s] face was covered in blood,” the deputy said.

The boyfriend told deputies that he was laying down on the couch asleep when Starkel advised him to wake up and eat.

When he didn’t wake up or move from the couch, Starkel picked up a beer bottle and struck him in the head, the arrest affidavit said.

The deputy observed a cut on the boyfriend’s head.

Starkel told deputies that her boyfriend had been sleeping all day from drinking the day before. She woke him up to eat something, but he wouldn’t move.

She made him a burger, but he complained about it, according to Starkel.

The only time she grabbed the beer bottle was when the boyfriend tried to hit her with a camera tripod in the kitchen.

However, there were no signs of a disturbance in the kitchen area, according to deputies.

The blood on the couch and floor were in the living room, and deputies feel that Starkel’s explanation for her boyfriend’s head wound was inconsistent.

Barbara Starkel was placed under arrest and transported to the Indian River County Jail.