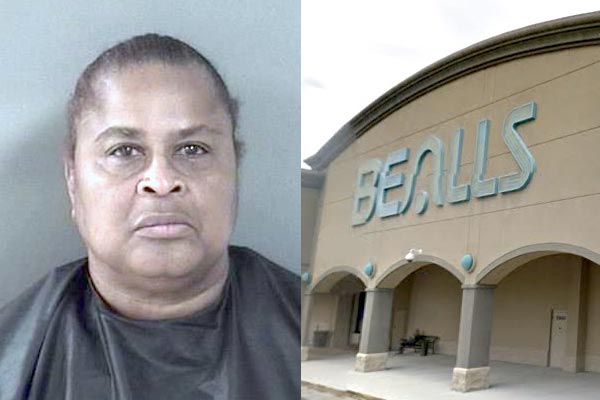 Woman chases security officer with pepper spray before she was arrested for shoplifting in Vero Beach.

VERO BEACH – A 56-year-old woman was arrested in Vero Beach after she stole items from Bealls and chased a loss prevention officer with pepper spray.

The incident occurred on Friday when a Vero Beach Bealls security officer observed a woman on surveillance footage select a pair of sandals and placed them into a Dillard’s shopping bag she was carrying.

The woman, later identified as Sandra Angela Harrison, then went into the women’s department and selected four clothing items before entering a fitting room.

The loss prevention officer immediately checked the fitting room after she exited and didn’t find the clothing items.

A few minutes later, Harrison exited Bealls while attempting to conceal the merchandise. The security officer approached Harrison with his badge and asked her to return to the store.

Instead, she pulled out a pepper spray. Harrison then turned towards the loss prevention officer “and began chasing him with the pepper spray, aiming at him,” according to the report.

Luckily, the officer didn’t get sprayed. She then turned around and continued to walk west towards the mall.

An Indian River County Sheriff’s Deputy arrived on the scene and detained Harrison. The Vero Beach woman was carrying a gold Michael Kors purse and a Dillard’s shopping bag.

The total value of the stolen merchandise was $306.

Harrison was arrested and transported to the Indian River County Jail where she was charged with retail theft and assault.