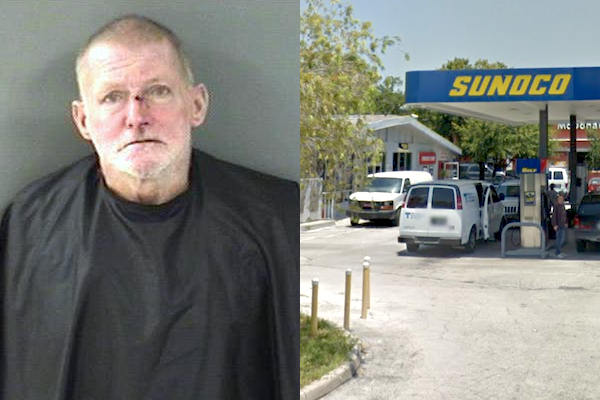 Ralph Edward Boardman, 63, who also arrested last week for drinking beer in front of the Cumberland Farms in Vero Beach, was asked to leave multiple times before telling the Sunoco clerk to “fu** off.”

The clerk stated that Boardman was drinking beer and carrying a crack pipe around the property.

Police made contact with Boardman and immediately smelled the odor of an alcoholic beverage coming from his breath. The officer observed a 16-oz can of Icehouse Edge Logger that Boardman was drinking from (an alcohol content of 8 percent). There was also a plastic bag of what appeared to be marijuana, and a clear pipe with a white rock pushed in it.

Boardman said he just released from jail and was drinking a cold beer.

When the officer asked about the plastic bag with green plant material, Boardman said, “yeah that’s my weed.”

“I asked Boardman about the clear pipe beside his pockets, and he stated ‘that’s just a little crack,'” the officer said.

The white rock located in the clear pipe tested positive for cocaine.

Boardman has already been trespassed at the Vero Beach Sunoco and arrested at the same located multiple times this year.

Boardman was arrested and transported to the Indian River County Jail where he was charged with Disorderly Intoxication, Possession of Drug Paraphernalia, Possession of Marijuana, Consuming Alcohol in Public, and Felony Possession of Cocaine.