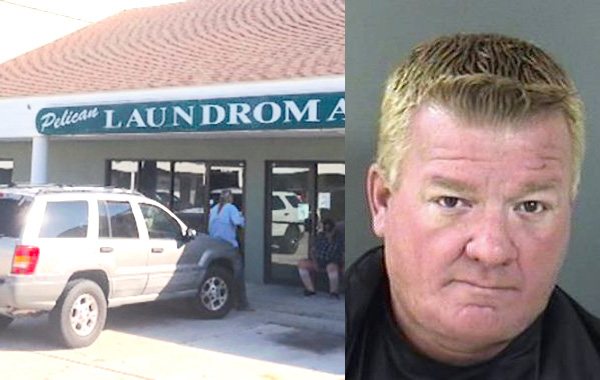 A worker for the Indian River County Firefighter's Fair was arrested for stealing from a Sebastian laundromat.

VERO BEACH – A worker for the Indian River County Firefighter’s Fair was arrested in Vero Beach after stealing about $1,800 in coins and bills from the Pelican Island Laundromat in Sebastian.

Michael Allen Giorno, 47, of Port St. Lucie, was arrested on charges of felony grand theft after admitting he was one of the workers at the Firefighters Fair seen on video surveillance stealing coins from a change machine at Pelican Island Laundromat.

The laundromat owner was called by a customer who told them his coin machine wasn’t working. The customer also advised that the door to it was open.

Deputies presented photos from the video footage of her and two men seen at the laundromat. She identified one male as Pat Ferron, who no longer works for the fair. The other man, seen taking the coins and cash from the machine, was identified as her boyfriend, Michael Giorno.

Ferron said she had no involvement in the crime and was only at Pelican Island to do her laundry.

Deputies then made contact with Giorno who works as a carnival employee at the fair. Giorno said that he and Pat Ferron, who was fired from the fair after failing to pass a drug test, stole the money and divided it. Each man received half of the stolen money.

Giorno was transported to the Indian River County Jail. Bond set at $5,000. Deputies are still following up with the other suspect.