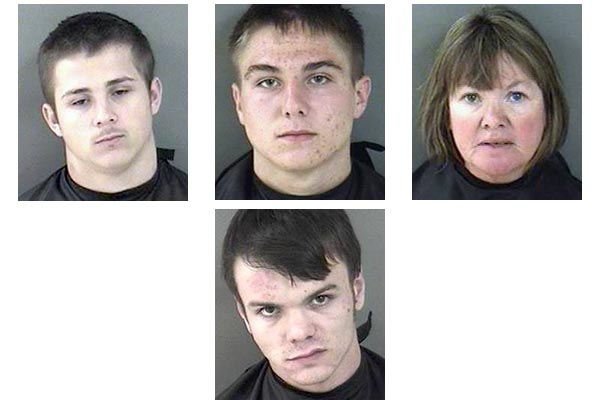 The detectives were assigned to investigate a residential burglary where two firearms were stolen. As a result of that investigation, they identified several auto burglaries that also included firearm thefts.

Shawn Newman (17), and Samuel Tecsi (17) both of Vero Beach, were arrested and charged with residential burglary, grand theft of a firearm, possession of a firearm by a minor, dealing in stolen property, and violation of probation.

Newman was also charged with auto burglary and additional counts of theft and possession of a firearm. During their interview, both admitted the burglaries and told detectives that their motive for stealing firearms was to trade them to Michael Smith (19) of Vero Beach, for drugs.

The teens said that Smith provided them with marijuana and marijuana wax in exchange for stolen firearms.

“Detectives obtained a search warrant for Smith’s apartment in the 6900 block of 26th Street. Smith was arrested and charged with dealing in stolen property, four counts of possession of a firearm by a delinquent, possession of an altered firearm, possession a controlled substance, and possession of drug paraphernalia,” Sheriff’s spokesman Major Eric Flowers said.

Also arrested during the search warrant was Smith’s mother, Kimberly Smith, on four counts of possession of a controlled substance.

“Getting these teen delinquents off the streets helped clear up a number of auto and residential burglaries for our agency and the Vero Beach Police Department. Our detectives did a fantastic job with this investigation, which should serve as a warning to those who think they can get away with burglaries in Indian River County. Make no mistake about it, we will find you and we will put you behind bars. This case should also serve as a reminder for our residents who chose to leave firearms in unlocked vehicles. These teens were able to easily access these guns through unlocked car doors,” Indian River County Sheriff Deryl Loar stated.

As part of this investigation, detectives have recovered six firearms, 437 grams of marijuana, 400 grams of marijuana wax, 103 grams of hallucinogenic mushrooms, 94 hydrocodone pills, 29 grams of cocaine, 9 grams of flakka, 4 Xanax pills, and one marijuana plant. Detectives estimate the street value of the seized narcotics at just over $50,000.

Detectives have pending charges for another 15-year-old teen and know that other were involved in this case. Anyone with information about this case or the location of these teens is encouraged to contact Detective Chris Lester at 772-978-6188.

You can remain anonymous by contacting Treasure Coast Crime Stoppers at 1-800-273-TIPS (8477) or through their website at tcwatch.org. You may be eligible for up to $3,000.00 reward if your tip results in an arrest.