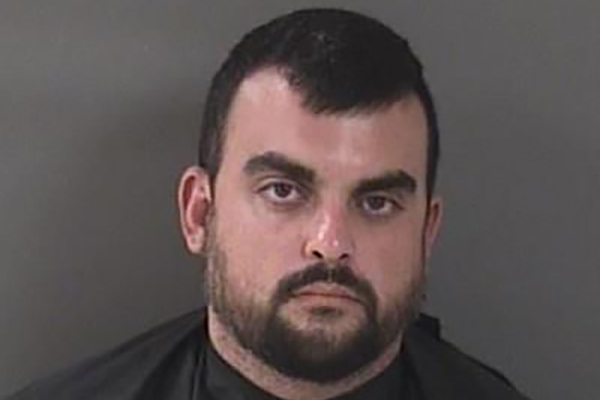 A Speedway worker in Sebastian was arrested on a charge of grand theft after stealing $1,890 in lottery tickets.

Sebastian police responded to Speedway, located at 700 U.S. Highway 1, in reference to a theft.

The manager said he was conducting the store’s Florida Lottery Reconciliation Report and discovered that 76 scratch-off tickets were missing from the night shift.

The missing tickets are as follows:

The total financial loss from the 76 tickets for the Speedway is $1,890. The manager then showed security video footage from the previous shift.

The clerk was identified as 28-year-old Kyle Scott Lentini of Sebastian. The video showed Lentini arriving for his shift just before 11:00 p.m., where he removed money from his pocket and brought two scratch-off tickets behind the counter, according to the report.

During his shift, Lentini removed several rolls of scratch-off tickets from behind the counter and without paying for them, the affidavit said.

“Prior to Lentini leaving the store after his shift, Lentini asked [the manager] several questions on how the store keeps inventory on lottery sales,” the officer said in the affidavit.

Lentini then scanned the tickets behind the counter to determine if they were winners. After scanning a large number of tickets, Lentini placed them in the trash.

“At no time during the incident did I observe Lentini place any currency into the register after removing the scratch-off tickets,” the officer said.

Police then questioned Lentini about the missing tickets. He told police that he did purchase $30 worth of scratch-off tickets when arriving to work.

Lentini then stated that he removed an unknown amount of scratch-off tickets from behind the counter without paying for them during his shift.

“After scratching the tickets that he removed, Lentini stated that he won $500 and placed the money back into the register,” the affidavit said.

Lentini was arrested and transported to the Indian River County Jail. He was later released after posting $2,500 bond.