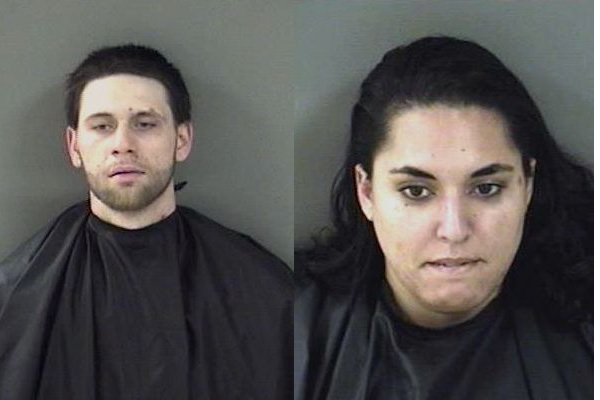 A manager at a Sebastian Publix observed two suspects who matched a photo from a recent theft in Vero Beach.

SEBASTIAN – A Publix store manager in Sebastian spotted two people matching the description of two shoplifters that were recently reported by the Publix in Vero Beach, according to the Sebastian Police Department.

The manager, Melissa Sulem, called the Sebastian Police Department and continued to monitor a male and female as they were walking around the store, located at 9621 U.S. Highway 1. The two suspects have been seen at several stores across the state stealing allergy medications.

Officers made contact with the manager who said that the female was acting as a lookout while the male began taking all the items off of the shelves from one of the aisles.

The items included several allergy medications. The two individuals matched security surveillance from a Vero Beach Publix store, where they also walked out with the same drugs.

When officers arrived, the female suspect alerted the male who left the cart full of items. He appeared to be avoiding police detection. The female left the store and went to a parked vehicle.

Police made contact with the male, identified as 25-year-old Justin Tyler Wolf of Pembroke Pines, Florida, who had a warrant for Grand Theft out of Broward County as of March 16th. Wolf also had a second warrant for his arrest out of Sarasota County for Retail Theft as of March 16th.

Officers then made contact with the female suspect, identified as 29-year-old Hendi Llerena of Davie, Florida. She matched the picture that was sent out to the Publix Supermarkets in regards to the Vero Beach theft.

“The female suspect became very nervous and started to make several furtive movements towards a black UCF Knights backpack located on her lap while mumbling,” the officer said.

The officer then noticed a grocery bag in the backseat full of allergy medications and Zantac. When police asked her about the bag, Llerena became emotionally distraught and started crying. She told officers that her boyfriend had stolen the items from the Vero Beach Publix earlier in the day.

Llerena also had a warrant out of Sarasota County for Retail Theft as of March 16th.

She told police that she and Wolf intended to arrive at the Publix in Sebastian and steal items from the store. They planned to flee the location without paying for the merchandise. Additionally, Llerena advised them that they have committed similar crimes in several different stores across the state.

Llerena said the two were going to sell the items to a large criminal organization as part of a scheme that involves shoplifting at Publix stores.