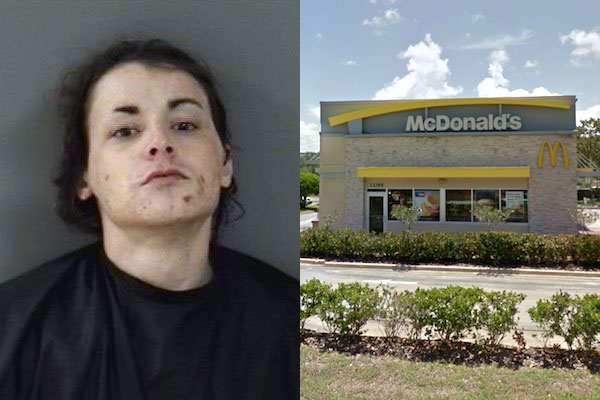 SEBASTIAN – On Wednesday, a 31-year-old Sebastian man was arrested after damaging a deputy’s patrol vehicle at McDonald’s, according to the Indian River County Sheriff’s Office.

The patrol vehicle was parked at McDonald’s, located at 13395 U.S. Highway 1 in Sebastian, at 7 a.m. while the deputy was having breakfast.

When the deputy left the establishment, he saw the damage done to his vehicle. A witness gave the deputy a description of Shepard, who was walking down U.S. Highway 1, the affidavit said.

Shepard was wearing a blue “paper hospital type outfit” and carrying a large stick object, according to the report.

Deputies ordered Shepard to put the metal rod on the ground. He then became irate and began yelling at law enforcement, the report said.

Shepard yelled and swung the metal rod at deputies when ordered to stop, the affidavit said.

“I drew my Taser and deployed it. One Taser probe struck the defendant’s upper back, and the other struck his buttocks,” the deputy said.

Shepard was charged with Criminal Mischief, Felony Resisting Arrest With Violence, and Felony Aggravated Assault on a Law Enforcement Officer. His bond was set at $15,000.