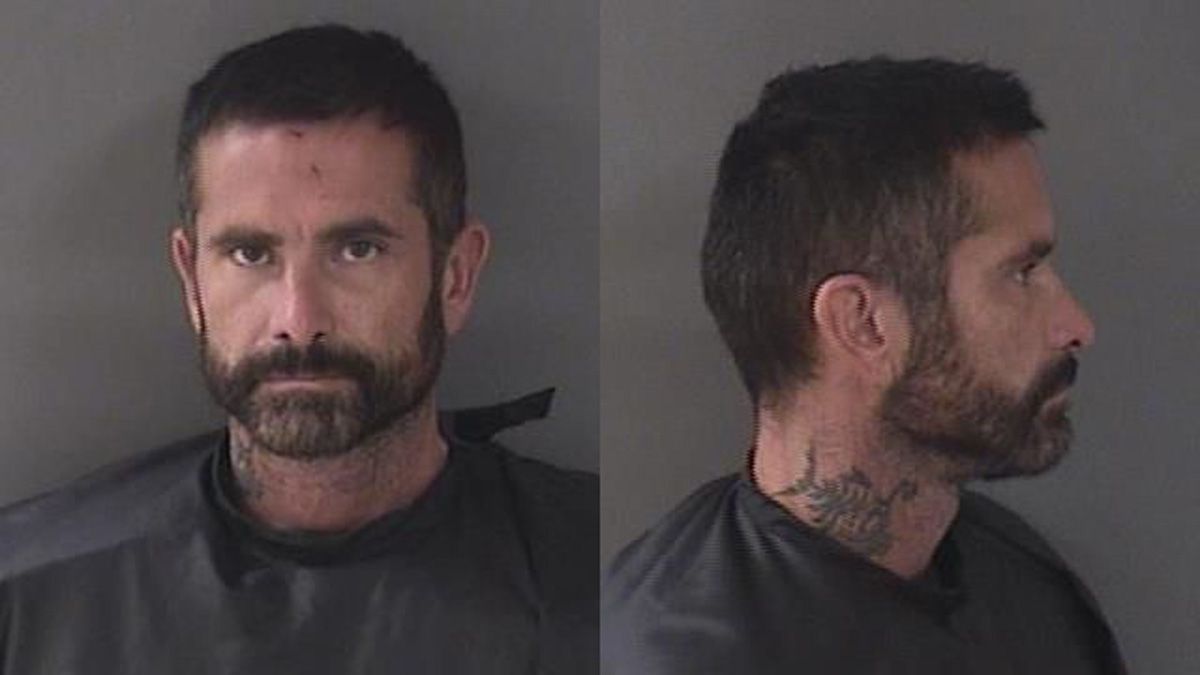 According to the Sebastian Police Department, a man was arrested early Monday after holding a knife to his girlfriend’s throat.

At approximately 12:30 a.m., police received a 911 hang-up call from the 200 block of South Wimbrow Drive in Sebastian. According to the affidavit, when officers arrived, a woman ran to them and said her boyfriend just held a knife to her throat.

The man was identified as 40-year-old Steven Wayne Artis of Sebastian.

“I observed Artis grabbing belongings and placing them outside of the residence. At one point, he puts a shirt on and exits the front door onto the entryway to the house. Artis makes eye contact with me; I advised him that I am an officer with the Sebastian Police Department and in fear that he is still armed, I give him a loud and clear verbal command to place his hands in the air,” the officer said.

According to the report, Artis ignored all verbal commands given by the police. He eventually sat down on a bench and was detained. Police then conducted a sweep of the residence for any other individuals who may have been inside.

Police observed broken items in the living room and blood on the floor in the living room, kitchen area, and bedroom. In addition, there were other multiple areas of the house in disarray, according to the report.

The girlfriend told police she was visiting and that Artis was “doing drugs all day and night.”

The girlfriend said he woke up hours later and started to become “mean and aggravated” while accusing her of “hiding his drugs,” according to the affidavit.

At this point, she began to walk out of the residence to get away from Artis. The police report said as she was walking away, he allegedly put her into a “chokehold” to the point of her losing consciousness.

“When she regained consciousness, Artis began threatening to kill her. Artis proceeded to arm himself with a steak knife. Artis grabbed [the girlfriend] and started attempting to push her head back to expose her throat. Artis stated that ‘he was going to end my life and then his,'” the girlfriend told police.

During the struggle, Artis placed the knife on her throat as she “plead for him to stop.” While pleading for her life, the girlfriend grabbed the knife’s blade and pushed it off her throat, according to the affidavit.

Artis then proceeded to walk into the bedroom, and she grabbed her phone and snuck outside to hide. The girlfriend stated that she then called 911 and hung up because she knew it would send the police, and she didn’t want him to find her on the phone.

Police then made contact with Artis, who wanted to speak about the incident. He stated there was no physical altercation inside the residence and that his girlfriend was going through his phone and became angry after finding a conversation he had with another female.

“Artis stated that he was in the process of breaking up with her and stated that he has messages on his phone where she threatened to get even with him,” the officer said.

Artis gave police permission to search for the messages on his phone.

“I located the conversation between him and [the girlfriend]. I read multiple text messages that did not support his statement; notably [the girlfriend] appeared to be advising him, she hopes that he is well and that he needs to get some help,” the officer said.

However, Artis told police he does not do drugs.

Artis was transported to the Indian River County Jail, where he is being held on a $116,000 bond.

List of Sebastian Restaurants and Stores Open on Christmas Day 2020

List of Sebastian Restaurants and Stores Open on Christmas Day 2020