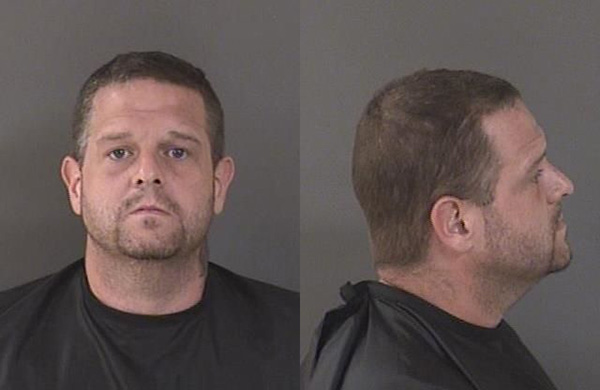 Police say a man beat his wife and dragged one of their children out of the house while telling them “someone’s going to die” and “if you don’t like someone touching your mother, then fight,” according to the affidavit.

The Sebastian Police Department received a call Thursday at approximately 7:10 p.m. about a physical disturbance.

Officers made contact with Jeffery Lee Miller, 37, who resides in the 700 block of Rolling Hill Drive in Sebastian. Miller was non-compliant and would not answer any answers while putting his hands in and out of his pockets. After refusing all commands, Miller was detained.

Miller’s wife said that the two were in an argument about feeding baby squirrels that led to a physical altercation. The wife accused Miller of grabbing her by the arms and taking her into a bedroom.

The wife then alleges that Miller told their 4-year-old to go into her bedroom because “he’s going to fu** her mother up,” according to the arrest affidavit.

Miller is then accused of grabbing their 11-year-old by his arms and legs and dragging him to the front door while the child was crying and pleading for him to stop, the report said.

The wife then alleges that she ran to the front door to protect the child, but then Miller dragged her outside, stating “someone’s going to die,” police said.

A neighbor who witnessed part of the altercation at the front door observed Miller punching his wife in the legs, dragging her back into the house as he stood over her. Miller told the neighbor “everything is fine” and to “mind your own business,” the affidavit said.

One of the children, a 15-year-old, said Miller stated: “he was going to make his mom watch him beat the fu** out of her.” He witnessed Miller dragging the 11-year-old by the arms and legs while stating “one of us is going to die today,” the report said.

The 11-year-old told police that Miller grabbed him and dragged him outside and said “if you don’t like someone touching your mother, then fight” and “one of us is going to die today,” the arrest affidavit said.

Miller was arrested and transported to the Indian River County Jail on charges of Battery Domestic Violence, Child Abuse, and Resisting Arrest. Bond was set at $16,000.