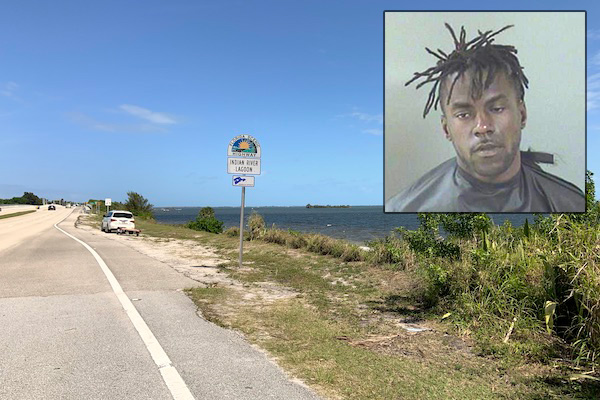 SEBASTIAN – On Thursday at approximately 5:30 p.m., deputies were dispatched to a location near the north county bridge at the corner of Indian River Drive and U.S. Highway 1 about a man throwing rocks at vehicles, according to the Indian River County Sheriff’s Office.

“Somebody got hit in the head with a rock. Deputies have one person in custody,” Major Eric Flowers told Sebastian Daily.

As deputies approached the scene near the bridge that leads into Micco, they observed a man bleeding from an injury to the left side of his head. The victim said he was turning right onto U.S. Highway 1 from Indian River Drive when a man threw a rock at his vehicle.

“The rock was chucked through the open driver’s window and struck him in the head,” the deputy said.

The victim described the subject as a younger black male wearing a black hoodie, black pants, and carrying a fishing pole. The victim pointed to the suspect standing near the north county bridge and said, “That’s him.”

Deputies made contact with the suspect, identified as 30-year-old Quinton Jermaine Douglas, who kept changing the details of what happened at the intersection of Indian River Drive and U.S. Highway 1.

“The first statement Douglas gave was he picked up the rock and threw it at [the victim] in self-defense. The second statement was he didn’t pick up a rock at all. The third time he said he only picked up a rock but didn’t throw it,” the deputy said.

Douglas stated he was at the location since 10:00 a.m. Thursday fishing near the bridge.

Douglas was arrested for Battery, and Felony Shoot or Throw a Deadly Missile. He was transported to the Indian River County Jail where he is still being held on $8,500 bond.