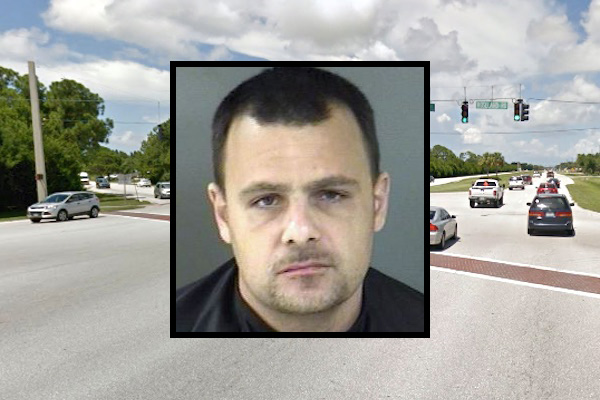 SEBASTIAN – A 37-year-old man was arrested by the Sebastian Police Department after leaving the scene of an accident on CR 512 near Walgreens.

Nicholas Gagnon was driving a gold Toyota Camry and traveling east on CR 512 after exiting I-95, according to the report.

Witnesses say that Gagnon drove recklessly, swerving in and out of traffic, at a high rate of speed.

Once at the intersection of CR 510 and CR 512, Gagnon cut in front of one of the witnesses. Another driver began yelling at Gagnon asking “what his problem was,” the report said.

When the light turned green, a black Trans AM was attempting to pass Gagnon, and that’s when he allegedly swerved into the vehicle. This caused both cars to collide and hit the curb.

After the crash, the victims in the Trans AM were upset, and Gagnon turned his car around and left the scene. Witnesses wrote down the tag information and watched the Camry pull into the Sebastian River Landing subdivision.

Police traced the tag number to a residence in Sebastian River Landing. Officers went to the home, and a male and female said they own a Toyota Camry, but their son, Nicholas Gagnon, was driving it.

They called Gagnon on the phone, and he said the Trans AM swerved and hit him. He agreed to return to the residence.

Gagnon was arrested and transported to the Indian River County Jail where he was charged with felony aggravated assault with a deadly weapon, and for leaving the scene of an accident with property damage.